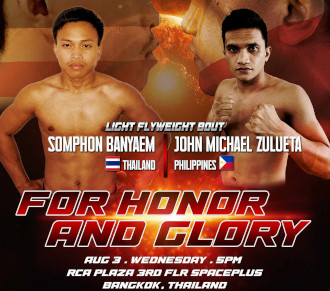 Undefeated Filipino boxers John Michael Zulueta and Herlan Gomez will have the chance to shine bright when they climb the ring to battle against tough Thai opponents next Wednesday in Thailand.

Feeling well-trained and more-than-ready, Zulueta and Gomez will see action in the international 11-bout Highland Boxing show set to unfold on the evening of Wednesday, August 3, at the luxurious SPACEPLUS Night Club, RCA Plaza, in Bang Kapi, Bangkok, Kingdom of Thailand.

Unbeaten former world-ranked Light Flyweight “The Striker” John Michael Zulueta (12-0-2, 6 KO’s) will have the mission to lock horns thrillingly against fast and furious 25-year-old Thai fighter Somphon Banyaem (6-6, 6 KO’s) in a six-chapter non-title battle in which the Bacolod-resident puts his 14-fight undefeated record on the line.

The hard-swinging Somphon Bantaem, who hails from the City of Ubon Ratchathani in Northeastern Thailand, gets into his important rumble against Zulueta hot from scoring thrilling knockout wins in his last three fights, now wanting to ravage the Filipino.

Will Zulueta, 26, be able to keep is record pristine by skillfully handling the coming-forward Somphon?

That’s what his supporters wish as the Visaya warrior needs to advance his boxing career. Indeed, a setback at this stage in his career would be disastrous, especially as Zulueta aims to get back into the 108-lbs division world rankings.

The rumble will be Zulueta’s second appearance in Thailand after scoring a round five TKO win over Indonesian journeyman Jack Amisa last May in Bangkok. However, Wednesday’s opponent Somphon is far more dangerous, far younger, stronger, faster and more determined than Amisa. Plus, Somphon is the local fighter.

Zulueta vs Somphon is a hot 6-round battle in the 108-lbs division that fans are looking forward to enjoy.

Can Zulueta pull off the win, his second victory in the Land of Smiles? Or will the heavy-handed Thai derail the career of the promising fighter born in Calatrava, Negros Occidental? THAT we have to find out. 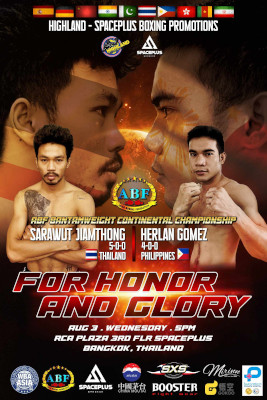 Meanwhile, kababayan Herlan Gomez (4-0, 2 KO’s) does not have it any easier either as the native of Saravia in Negros Occidental rumbles Thailand’s undefeated KO artist Sarawut Jiamthong (6-0, 6 KO’s) for the vacant ABF Continental Bantamweight Title.

The 22-year-old Gomez is in his second battle in Thailand following his win by points over Thai newcomer Parin Luangpon (2-1) last May in Bangkok.

But Gomez’ coming foe, Sarawut, is a far superior fighter with 100% more quality and skills than the prior foe, Parin; not to mention that Sarawut has such a devastating dangerous power in his blows, a threat of which Gomez needs to be mindful. Completely fast and alert, ready to deliver countermeasures.

Wednesday, August 3, in a show billed as “For Honor and Glory,” a hot event staged by award-winning Filipino promoter Brico Santig of the Highland Boxing Team in association with SpacePlus Night Club, and veteran Thai man of boxing Supanat Chanram.

Show billed as: “For Honor and Glory”

May the Best Men Win!

The author Carlos Costa is a veteran boxing reporter attending boxing since 1977. Carlos can be reached at [email protected] and whatsapp +639184538152.