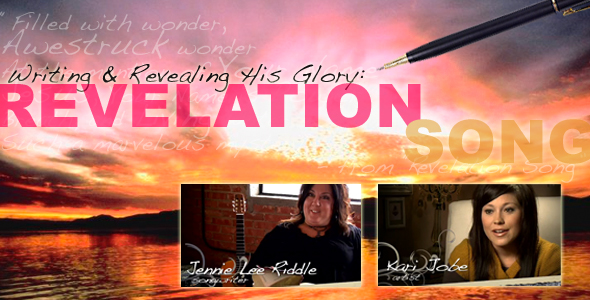 It’s awesome to see the process and inspiration of songwriters and what inspired them in the creation of their music. The worship song “Revelation Song,” written by Jennie Lee Riddle, beautifully and lyrically displays the splendor and glory of God, and it’s sung in many churches and by various artists.

Kari Jobe sings Revelation Song on her album “Kari Jobe,” and describes the song as “all about His glory” and a “foretaste of what we’ll sing in Heaven.” In interviews she says she thinks it’s “God’s favorite song,” for her to sing because every time she does God’s presence is “brand new and anointed.”

Last month Kari Jobe lead worship at my church, and as the song was sung not a dry eye was in the place as hands were raised all around by people of every age and every color. Here’s a video of her singing it at another church:

Integrity Music recently put up this video of the writer, Jennie Lee Riddle, and recording artists, Kari Jobe, and Phillips, Craig & Dean (who sang the song as the single of their upcoming album “Fearless”) discussing what “Revelation Song” means to them, and how it came into fruition. (Update: Phillips, Craig and Dean’s version of “Revelation Song” recently peaked at #1 on the Billboard’s Hot Christian AC.)

“…We needed a sight of Jesus, we needed somebody so much bigger than ourselves to lift our eyes up off of our daily, and off of the rubble and off of the worry, and magnify Him… To get to see Her, every generation, denomination, every nationality singing to Him, and just enjoying His beauty and His holiness, and Him wrapping Her up as one, it’s just overwhelming and humbling. ” – Jennie Riddle 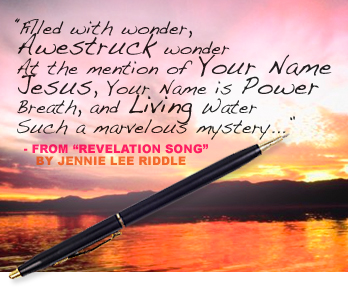 In an article she wrote, Jennie Riddle says she “asked the Holy Spirit to help me write a song that painted Him; a song that the angels and creation were already singing, so that we could join in with One Voice, as One Bride, to One King.” She says the verses Ezekiel 1:26-28 and Revelation 4 were her inspiration:

“And then, as they stood with folded wings, there was a voice from above the dome over their heads. Above the dome there was something that looked like a throne, sky-blue like a sapphire, with a humanlike figure towering above the throne. From what I could

see, from the waist up he looked like burnished bronze and from the waist down like a blazing fire. Brightness everywhere! The way a rainbow springs out of the sky on a rainy day—that’s what it was like. It turned out to be the Glory of God! (Message)

Jeannie also wrote of the impact of the song and how God has allowed it to move around the globe:

“’Revelation Song’ has taken on a life of its own, and it has been an intense joy to watch the Father “grow it up”, and to hear the Voice of the Bride sing to Jesus; Her voice is so lovely. I often get asked the song story, and even more often, the question of “how” it got “out there” comes up. My only answer is that God chooses what He chooses. No amount of maneuvering, strategizing, posturing, or pitching would have gotten my music “out there”… whatever that means. I remember telling Jesus with complete sincerity that I could wait until I got to heaven to hear my song sung (although, I also suggested that it would be a terrific song for the angels and great cloud of witnesses to sing when He comes back for us…In the event that He had not already chosen one for the occasion, I didn’t think it would hurt to ask!).”

Read more about Jennie’s story of how the song was birthed in her article on PraiseCharts.com. Also visit her on Myspace or at her official website, www.jennieriddle.com.