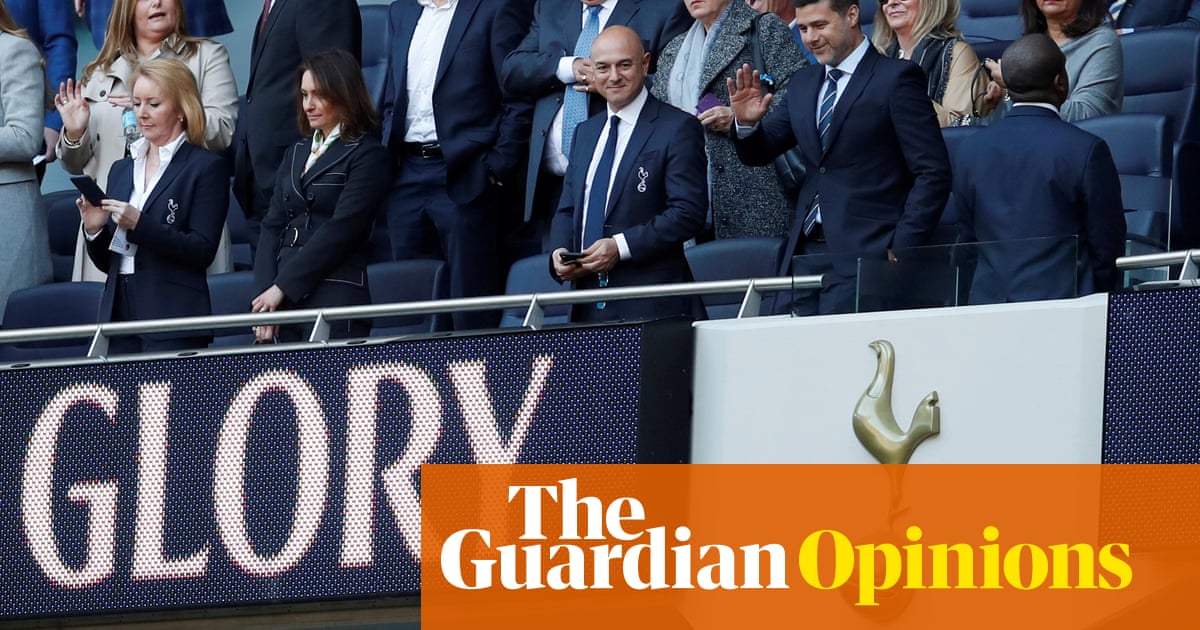 The lament that football has traded its soul for money has been associated with a departing manager of Tottenham Hotspur long before Mauricio Pochettino was sacked five months after taking the club to a miraculous Champions League final. The famous quote from Keith Burkinshaw, as he walked away from White Hart Lane in 1984 despite having won the Uefa Cup, was attributed to him by the veteran sportswriter Ken Jones: “There used to be a football club over there.”

Burkinshaw was working at a club which had sought to exploit new money coming into football by becoming the first to float on the stock market, bypassing the game’s century-old restrictions on owners making money out of clubs. Eight years later Alan Sugar had a vote as the Spurs owner to select BSkyB as the exclusive pay-TV broadcaster for the Premier League over free-to-air ITV, at the same time that Sugar’s company Amstrad was making the satellite dishes.

Any remembered feeling that football was once the people’s game with a pure sporting heart is a nostalgic oversimplification, but idealists still cherish the Spurs 1961 Double-winning captain Danny Blanchflower’s paean. “The great fallacy is that the game is first and last about winning,” Blanchflower said. “It is nothing of the kind. The game is about glory, it is about doing things in style and with a flourish.”

What you get when you appoint José Mourinho as manager – video

Whatever the combined headache of factors that led the Spurs chairman, Daniel Levy, to see Pochettino out of the new stadium door and sweep in José Mourinho’s deadpan unromanticism, it is fair to say he is not signed up to all of Blanchflower’s manifesto. The remarkable ascendancy of Spurs under Pochettino will always be remembered for the Champions League final and those dramatic comeback victories at Manchester City and Ajax on the way, when the coach was overwhelmed by emotion and humility for his achievement. After he had gathered himself, Pochettino tearfully thanked the game of football itself, for its marvellous gifts.

Levy was in the cushioned seats in those stadiums, memorably shown on television in a group of Spurs high-ups, applauding Pochettino as he wept his way around the pitch. But now, so soon after, business is business. Blanchflower, Burkinshaw, perhaps Lord Sugar himself could probably never have envisaged the huge financial architecture with which modern football is now surrounded. Nor how it must be contemplated by

Levy, chairman of a club owned by currency trader Joe Lewis via the Bahamas, with the monumental new stadium to pay for.

The sacking of Pochettino so early in the season, to give Mourinho time for his medicine to work, is a reminder of the adamant priority given to Champions League qualification, and the stressful way it operates for England’s football corporations. Put simply, the Premier League has a top six of clubs by earnings and regular performance, but four regular qualification places for the Champions League. Two from six have to miss out, but when they do, they suffer a football and financial hit which is the closest feeling they know to relegation.

Pochettino can be seen partly as a victim of his own overachievement, as he secured serial Champions League participation with Spurs still at White Hart Lane then temporarily at Wembley, and by some way in sixth place of the Premier League’s top six earning clubs.

Uefa has not yet published the distribution to the clubs of the euro-millions from last season’s Champions League, the first from the increased €4bn TV deals covering 2018-21. Spurs received €61m from Uefa in 2017-18 when they went out of the competition in the first knockout round, and last season’s figures, which Uefa will release in the next few days, must be expected to show that in excess of €80m was paid to Spurs from Pochettino’s run to the final.

Those sums, which help to elevate the Premier League’s top six above their aspirant competitors, are Uefa’s distributions alone. The participating clubs also earn from hosting the big European nights at their stadiums, increased sponsorships and other uplifts, although players are paid some of it in bonuses.

For Spurs the new stadium project has turned Champions League participation from a glad bonus to a target approaching a requirement, with the club having borrowed £637m, which Levy refinanced in September. To make the repayments, fully exploit the commercial benefits of that luxury new stadium in the inner city of London, and maintain Spurs’ place in the moneyed big six, Levy’s patience with a cherished manager has lasted only 12 league matches this season.

There still is a football club over there, but Tottenham Hotspur themselves charted the course from glory game to industry, decades ago.

The Life of Hercules in Myth & Legend