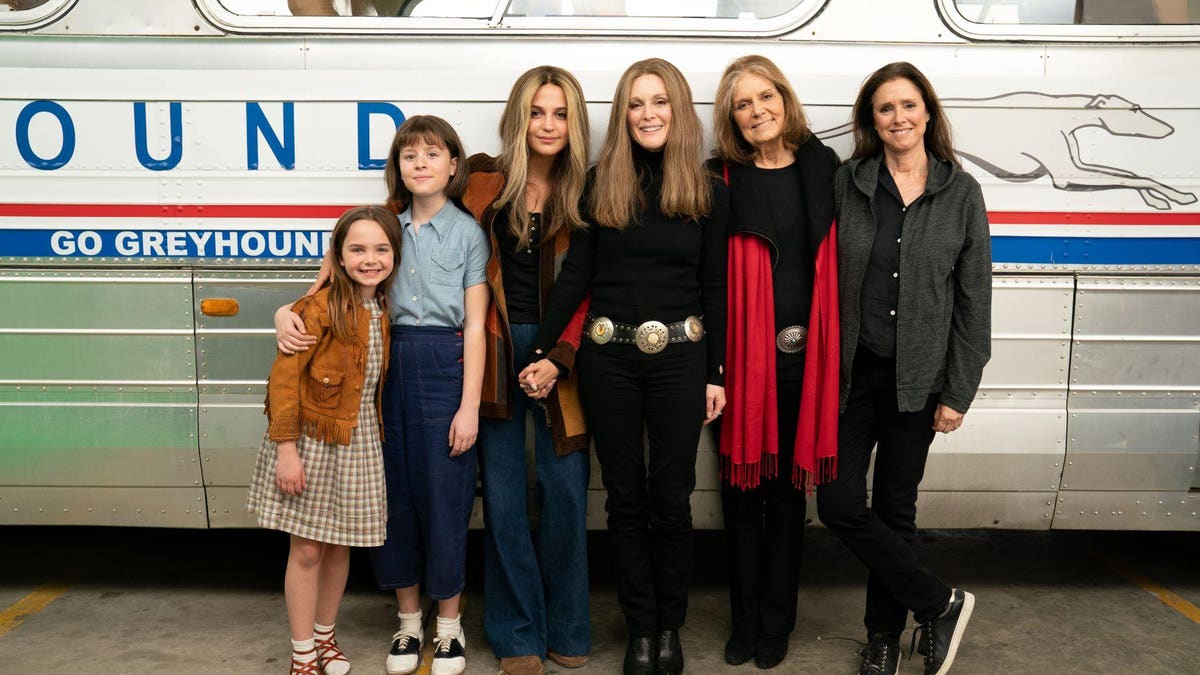 When Julie Taymor set out to tell Gloria Steinem’s story on film, her idea was to present Steinem at varying ages from six to eighty. Sometimes they would be alone. Other times the different Glorias would be interacting together, “questioning, comforting or challenging each other. That is what we do to ourselves,” says Taymor. 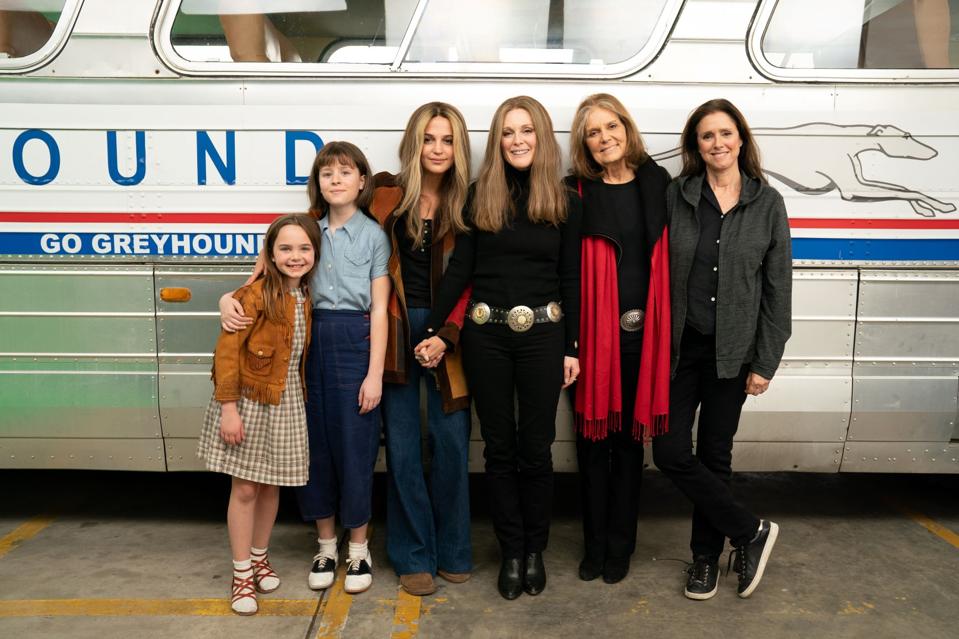 “How did you know?,” replied Steinem when Taymor shared her cinematic idea for the film The Glorias. “I often see myself across a room or street and wonder what my younger self thinks of what I’ve done? Or I wonder what she would say now that I know what I know.”

Based on Steinem’s memoir My Life on the Road, The Glorias takes place during eight decades of Steinem’s life and how she evolved into a writer and political activist who continues to help shape our culture and impact generations. We experience four Glorias—at six (Ryan Kiera Armstrong), 12 (Lulu Wilson), from 20 to 40 (Alicia Vikander) and then from 40 to 80 (Julianne Moore).

“That idea fueled how the different Glorias could enter into scenes,” explains Taymor of her non-linear storytelling. “The biggest humor occurs in the moments when Julianne steps in and takes Alicia’s place because the young Gloria doesn’t have anything to say. She can’t speak. She doesn’t have her voice yet.”

Taymor, who directed, co-wrote (with Sarah Ruhl) and produced The Glorias, highlights Steinem’s childhood and the unique bond she had with her father. “There was this adulation of the child for a father, who in real life was completely irresponsible and focused on himself,” says Taymor. “He caused her mother to be a dissatisfied, unfulfilled woman who had to pay the bills and be responsible. I thought that was incredibly moving.”

In fact, by the time she was 12, Steinem’s father left the the family and she was forced to be the mother of her mother. “That answered why Gloria didn’t feel the need to start a family and take care of children,” adds Taymor. “She had done that already.”

The Glorias also presents Steinem as a young woman in India, revealing the origins of her activist life. It also delves into the founding of Ms. magazine and spotlights the women’s rights movement and Steinem’s fellow activists who were essential in creating change and shifting stereotypes. As Taymor explains, “African-American, hispanic and native American women were at the forefront of the activist movement and fought for women’s equality, gender equality and racial equality. As Florynce Rae Kennedy says, ‘sexism and racism are intertwined. It cannot be separated.’”

The film will be released on September 30 on Digital and is streaming exclusively on Prime Video. The Glorias also features Janelle Monáe as Dorothy Pitman Hughes, Bette Midler as Bella Abzug, Monica Sanchez as Dolores Huerta, Lorraine Toussaint as Florynce Kennedy, Kimberly Guerrero as Wilma Mankiller and Timothy Hutton as Steinem’s father Leo Steinem. “I did not want to talk about Gloria’s boyfriends because that is not the real love story in this version of this road picture. It’s about the incredible women who impacted her life, starting with an African-American girl who helped her fulfill her dreams of tap dancing,” says Taymor.

To present others who shaped the women’s movement was essential to The Glorias. An important tenant of Steinem’s activism and core to her beliefs is that social justice stems from talking circles, from bringing people together and sharing stories.

As Steinem wrote in My Life On The Road, “One of the simplest paths to deep change is for 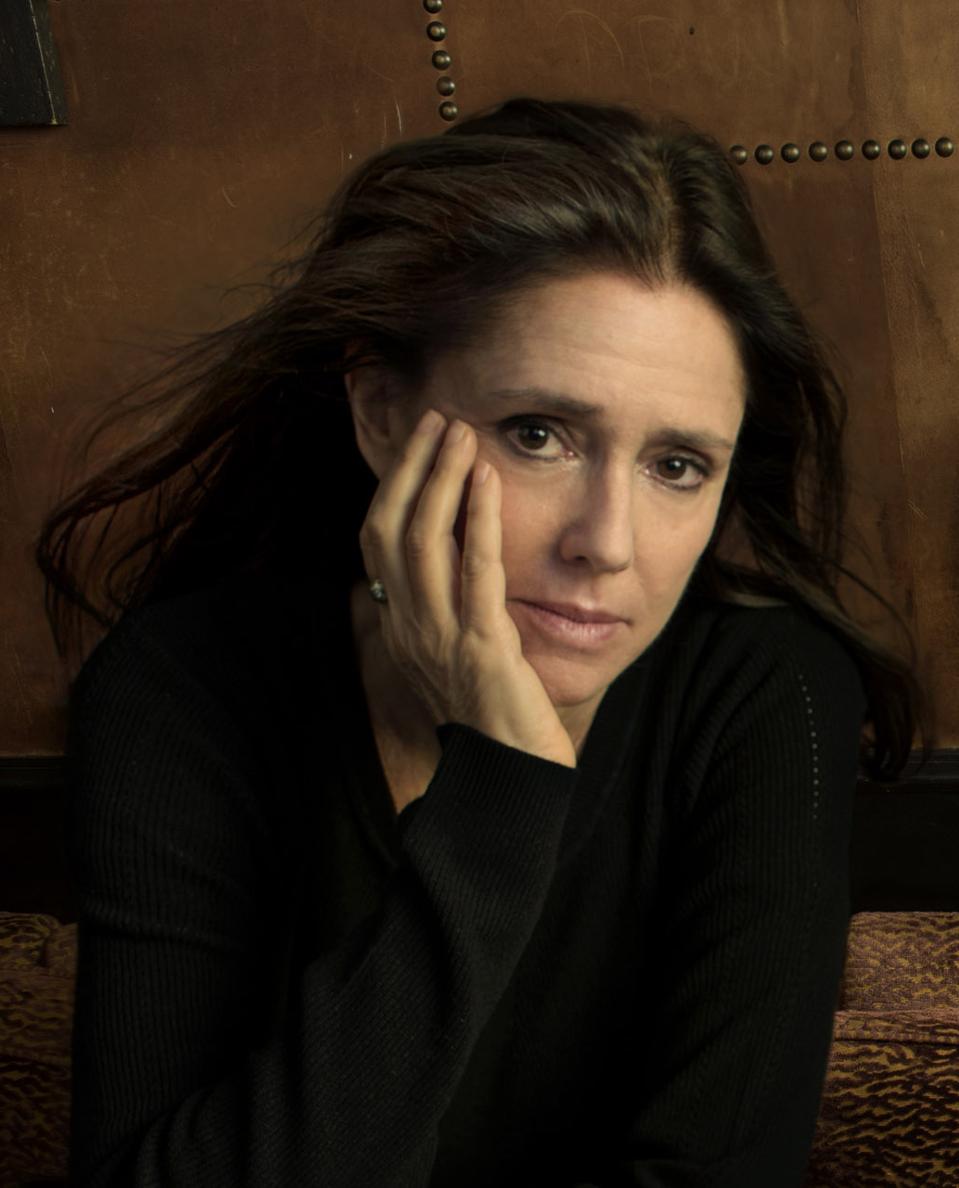 Julie Taymor directed and co-wrote The Glorias which will be released on Prime Video on September … [+] 30.

Jeryl Brunner: How did you first get inspired to do The Glorias?

Julie Taymor: In 2016, my dear friend gave me My Life On The Road to read on the beach in Tulum, Mexico. I knew Gloria very superficially. At first, I didn’t think it was a movie. It’s a road book that meanders and is not a biography in any normal way. But then I felt that the content and stories—of her childhood, her father and mother, her trip to India and the incredible women she worked with—was so compelling. I thought, we don’t know this part of Gloria Steinem, not in a public way.

I knew her well enough to be able to call and ask her if I could adapt it. She was shocked that I even thought there was a movie in the book. But she had total faith and trust. It’s so great when someone says, ‘OK. Go ahead. I love your movies.’ Then I went through the book and extracted all the things I love and thought were cinematic.

Brunner: You have said that you were very moved by Gloria Steinem’s dedication of My Life On The Road to the late physician who took the great risk referring her for an abortion. 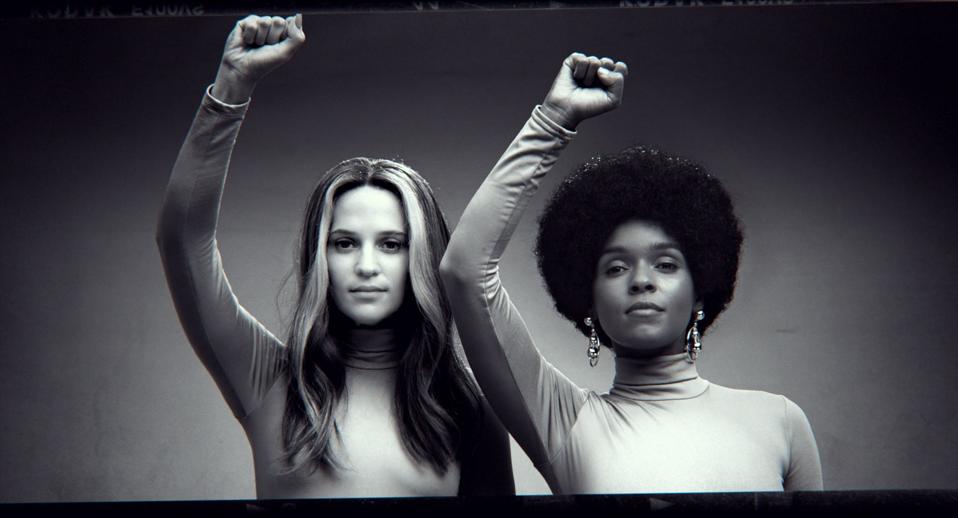 Alicia Vikander, (as Gloria Steinem), and Janelle Monáe, (as Dorothy Pitman Hughes), in The Glorias

Brunner: How did Gloria Steinem impact your life?

Taymor: She reached out when I was going through the chaos of Spider-Man. Gloria wasn’t aware of all the nasty, shark-like publicity. She just called me to say that she thought it was brilliant and that the Arachne love triangle was very inspired. I said, ‘well, they’re going to get rid of that.’ After she looked into it, she asked, ‘Are you aware of the misogyny going on here?’ She wanted to get a group of prominent women to protest because of the reaction of the press. It was kind of a witch hunt and she really felt empathy for me because she had been through it. 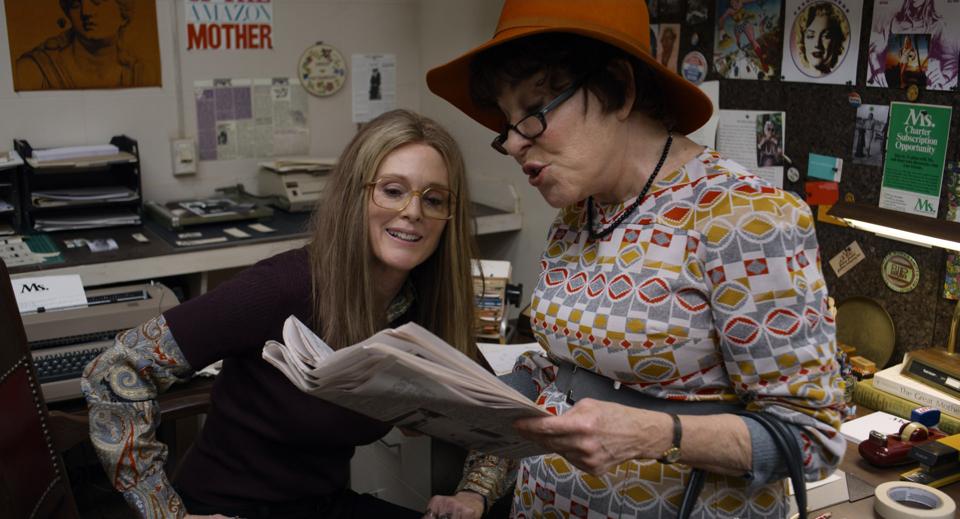 Julianne Moore, (as Gloria Steinem), and Bette Midler, (as Bella Abzug), in The Glorias

Taymor: I have admiration. The things I make are the result of my experience when I was in my twenties living in Indonesia for four years. I went through so many hellish things. And I had a certain amount of bravado and courage. I think, stick with that girl. Because that girl was willing to walk around the edge of an erupting crater. And she survived. We also had a huge bus accident on our way to the first performance of a theater company that I developed. It was a trial by fire. Sometimes the darkest moments really give you a full, rich life. I have to keep reminding myself of that. 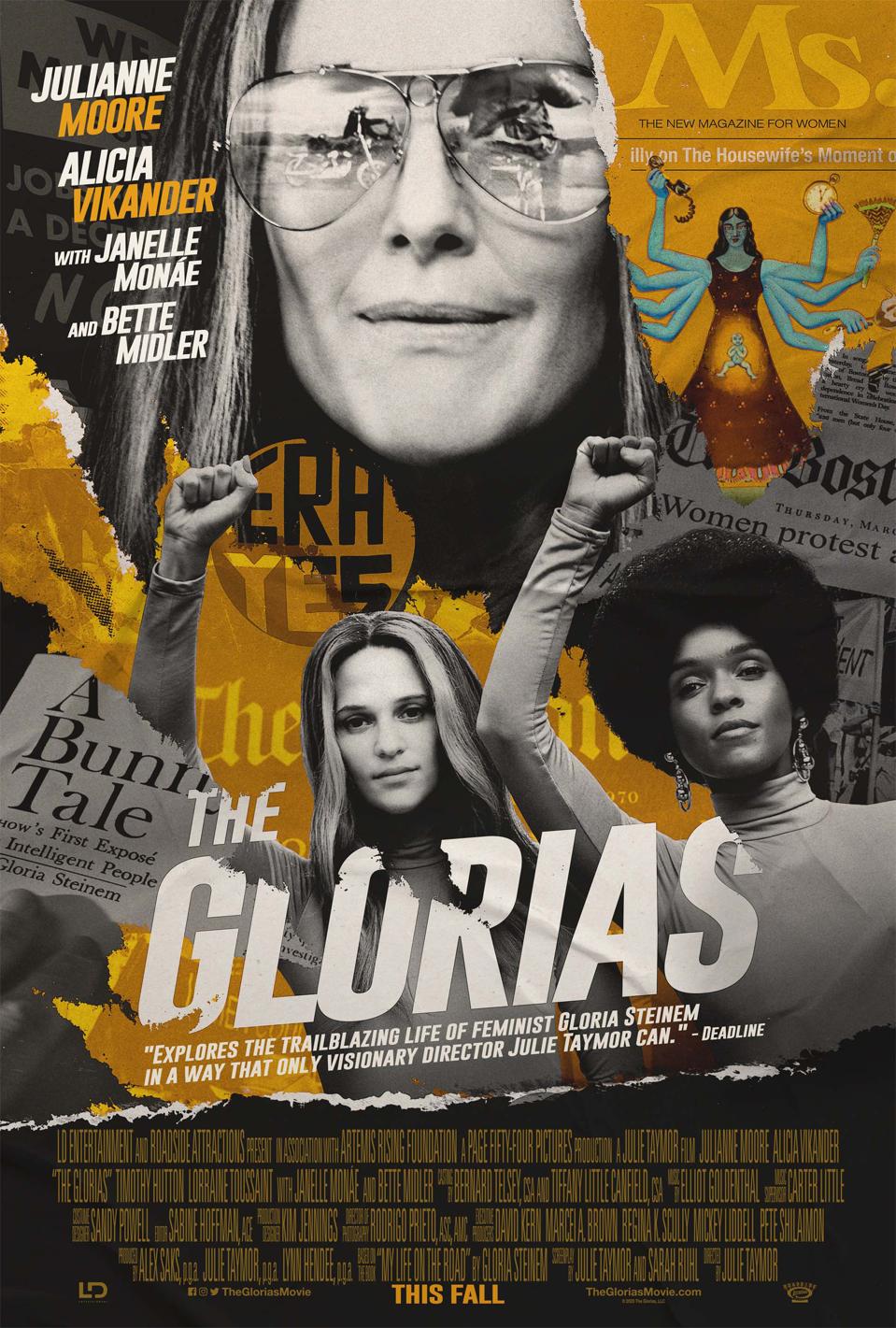