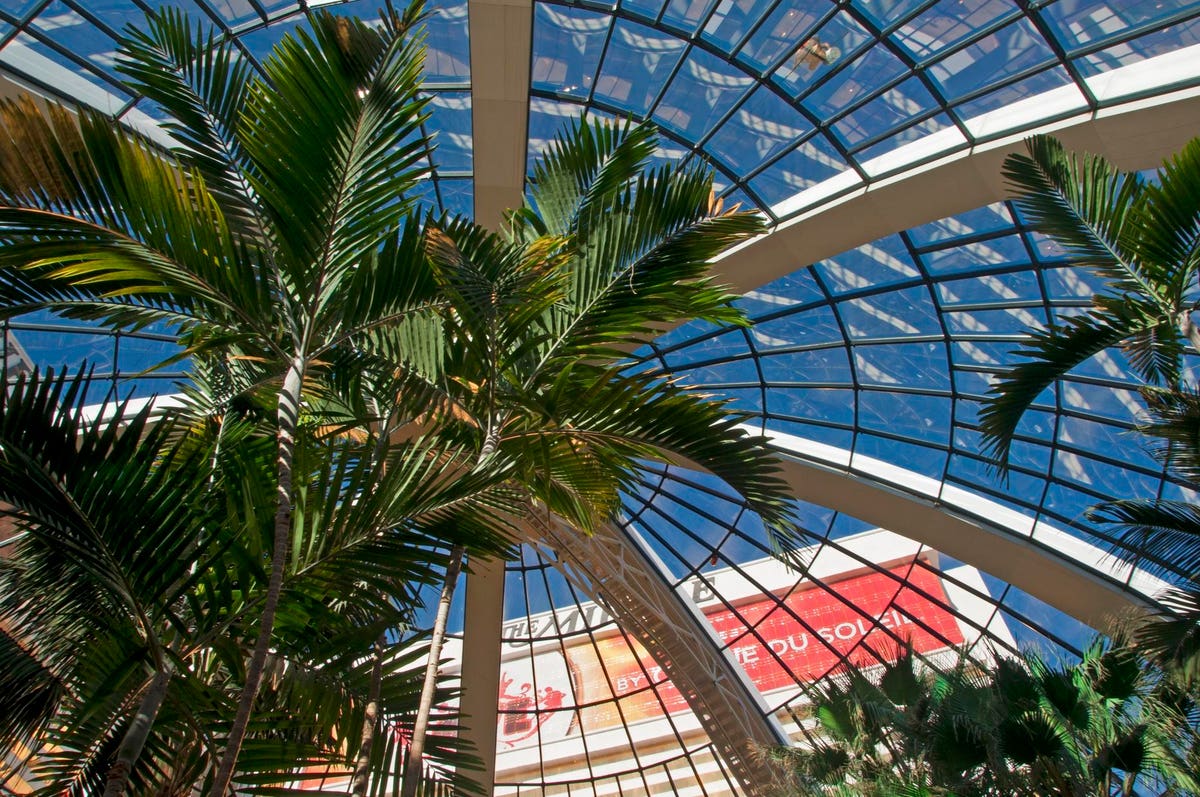 Our extended family went to Las Vegas last week to celebrate a big birthday. It was our first time in Las Vegas in more than two years. And of course, we stayed at the Mirage Hotel.

Most of the people in our group had not yet been born when the Mirage opened on November 22, 1989, as something new and spectacular in Las Vegas.

It was the first new major casino hotel in more than 10 years. The enormous tropic themed resort was at the time the world’s largest hotel, with a then enormous three thousand rooms. The new Mirage, dominating the Center Strip, had little in common with tired properties like the Frontier, Stardust, Dunes, and Hacienda.

In fact, the new hotel looked like nothing seen before in Las Vegas. It had a roaring 90-foot volcano, a dolphin enclosure, and a display where the white tigers who performed in the Siegfried and Roy magic show were housed. A central glass dome housed a waterfall, lush foliage, and tall palm trees that developer/hotelier Steve Wynn had spent millions on.

Most of the grandeur lives on, although Siegfried and Roy are gone, replaced by the Cirque du Soleil Beatles “LOVE” show. A plastic statue of the duo, with one of their signature tigers, remains on the sidewalk outside the resort. But much of the 11-acre tropical beach remains, as do the bracing waterfalls I revisited with my now-adult son.

But change is inevitable in Las Vegas, as casino hotels are built and torn down to cater to differing tastes and demographics. The 33-year-old Mirage may not make its 35th birthday. MGM sold the hotel in December to Hard Rock Corp. for $1.075 billion. The Mirage is slated for demolition, aka “re-imagination,” as a Hard Rock property, complete with guitar, like its Seminole Hard Rock Hotel & Casino.

Yet on our mid-week visit, Mirage (to be operated by MGM until sometime in the second half of 2022) hosted a big crowd. With the desert city just starting to heat up during the last week of March, the pool was packed. There were long lines of guests at the restaurants and 24/7 coffee shop. Kibitzers waited to get into the action at the tables. The line for gelato reached thirty people for cones that started at 7 dollars.

While some might carp that the room décor is a little dated, the value was clear to hundreds of guests. Being able to book nice rooms at mid-week rates as low as $99 motivated those tired of winter and two years of lockdown to get away.

While guest rooms that week were indeed $99 a night on Expedia, a third “inevitable” needs to be added to the classic phrase “death and taxes.” That would be the resort fee ($40), which serves as the hotel industry’s profit firewall against the online travel agencies (Expedia, Priceline, Hotels.com) and Googles of the world.

Of course, there are also taxes and $15 per 24-hour parking, plus five-dollar coffees and the temptations of the minibar. Nonetheless, travelers still found the Mirage experience compelling. In a return to a past Vegas era, Millennial families even brought their young children.

Has Las Vegas itself come back from the depths of the COVID travel recession? The data, according

to the Las Vegas Convention and Visitors Bureau, is mixed.

Visitation for January 2022 was up 91.2% over the previous January, while February 2022 was up 69%. (March 2022 data is not yet available.) Convention attendance numbers were even better, up an astronomical 3367.4% in January and 2285% for February. Of course, those increases are from a tiny base. Nearly every convention in Las Vegas was cancelled, postponed or ‘went virtual’ early last year due to restrictions on group size and other COVID precautions.

The city still has a long way to go to reach full occupancy, with just 27.7% of hotel rooms occupied in January and 27.3% in February.

But based on what we saw at the Mirage, I’d bet those numbers go up in March. The week we were there, the hotel hosted a small construction convention with conventioneers once again wearing ID badges around their necks. But most guests were leisure travelers. They had come from everywhere to soak up the Las Vegas sun, play the slots or tables, and hit the shows, shopping, and Strip.

While the hotel is always associated with its builder, Las Vegas visionary Steve Wynn, Wynn only operated it from 1989 to 2000. MGM has operated the hotel from 2000 to 2022. MGM has been in transition as well, focusing on its core holdings (buying the other half of City Center and the Cosmopolitan) and its online betting business. MGM Resorts has also been selling “non-core” properties in Las Vegas. These include Treasure Island and Circus Circus (both now operated by Phil Ruffin) and now, the once-flagship Mirage.

In December, Bill Hornbuckle, CEO & President, MGM Resorts International, said “This transaction is a significant milestone for MGM Resorts, and for Las Vegas. As part of the team that opened The Mirage in 1989, I know firsthand how special it is, and what a great opportunity it presents to the Hard Rock team. I want to thank all of our Mirage employees who have consistently delivered world-class gaming and entertainment experiences to our guests for more than three decades.”

If you have not stayed there, or if you have and are feeling nostalgic, the next few months might be your last chance to explore the Mirage. The air conditioning and the pool should offer escape from the scorching summer heat.

But whether the Mirage in the desert will disappear via rebuild or in the traditional Las Vegas way, via televised implosion, the end of an era is coming soon.

The volcano still goes off hourly at the Las Vegas Mirage Hotel, but will it survive the transition … [+] to the Hard Rock in 2022?

The Day I Swapped My Dad for Two Goldfish on Vimeo

Otis Redding “The Glory of Love”