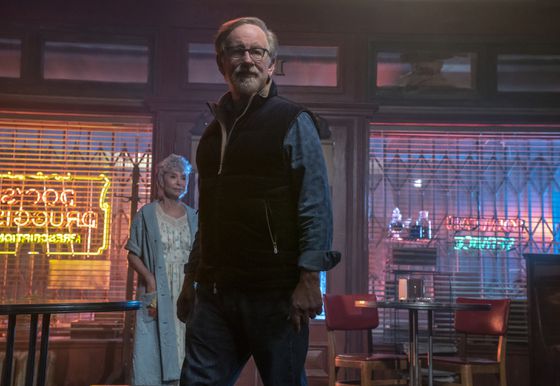 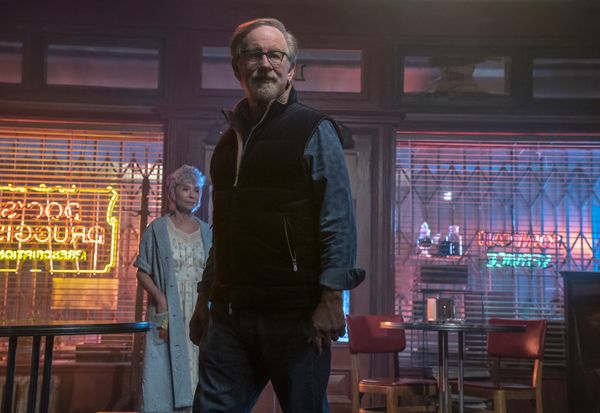 Director Steven Spielberg and Rita Moreno on the set of West Side Story.Photo by Niko Tavernise/20th Century Studios

Is it sincerity or end-of-year movie madness to call Steven Spielberg our greatest living American filmmaker?

Consider the evidence: 33 films across five decades, half of the titles all-time classics essential to the cultural firmament, the other half at the very least ambitious, remarkable, indelible. As author Molly Haskell put it in her required-reading 2018 biography Steven Spielberg: A Life in Films, “If he hasn’t touched every heart and mind with every picture, it’s a guarantee that he has touched even the harshest critic with one, or two, or three.”

A counterargument can be made for Scorsese, Tarantino, the Coens and other towering talents regularly categorized as darker, cooler than Spielberg. But Spielberg has delivered more cinematic entertainment, pleasure, comfort and emotional wallops than anyone else – and the sheer financial success of his work ensures that he’s been seen by more people, in more places, than any of his contemporaries.

Steven Spielberg’s West Side Story is vivid, sweeping, beautiful filmmaking that shows the power of Hollywood

Now, with this month’s release of West Side Story, his first ever musical, the filmmaker offers a surprise that we should have also anticipated: the ultimate Steven Spielberg movie. Not the best or the most important, but the most Spielbergian – a movie that the king of Hollywood has been working his whole life toward.

The new film – a bright and bold and brilliant romance that centres on, if you somehow didn’t already know, two 1950s New York gangs, the white-boy Jets and the Puerto Rican Sharks, whose war ensnares young lovers Tony and Maria – is an open-hearted celebration of all that big-budgeted, high-craft, go-big-or-go-home movies can offer. That Spielberg in particular can and has offered time and again.

That the film is a remake, an opportunity to engage with the past while also dialoguing with the future, only adds to the Peak Spielberg-ness of it all. His films have always been imbued with a childlike sense of wonder, and sometimes terror, at what the world is and what it might become. Here, then, is the entertainment that enthralled him as a child – the director still fondly remembers how much his 10-year-old self listened to the Broadway soundtrack after his mother brought it home – but revisited and recontextualized by the 74-year-old artist he has become. 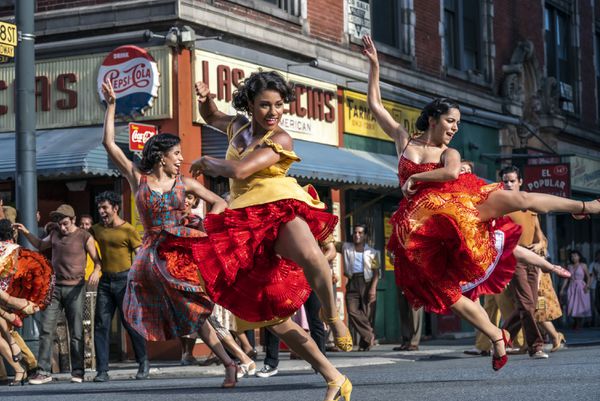 The film is Spielberg’s first ever musical.Photo by Niko Tavernise/20th Century Studios

But, well, hold on a second: maybe West Side Story isn’t actually a remake. The film’s song order sticks to the 1957 Broadway production, not the 1961 film (audiences might feel especially shaken by the placement of I Feel Pretty). And there is no real aping of either director Robert Wise’s onscreen aesthetic or Jerome Robbins’s choreography. Certainly don’t make the mistake of calling this a remake to Spielberg’s face – or more specifically of asking him whether he had any concerns about remaking another filmmaker’s work.

”I have no trepidations at all because I didn’t remake another filmmaker’s work,” he says. “All of our choices and our inspirations were drawn only from the original Broadway musical production. And we were very, very careful not to do anything that would be a remake of Bob Wise and Jerry Robbins’ film. We went right to the source material, which of course is based on another source material, Romeo and Juliet.”

It is the morning after West Side Story’s New York premiere – the very early morning, perhaps the earliest film junket that I have ever attended – and Spielberg has been made available for exactly nine minutes and 52 seconds via Zoom. Because he is who he is, Spielberg delivers maximum entertainment-journalism transactional impact amidst the pressures of the Hollywood publicity machine. So even though I’m probably interview No. 5 or 6 that day out of God-knows-how-many, he peppers the conversation with kind chuckles and personal-touch asides on the contents of my bookshelf – even though his Zoom background is a simple blue screen, all hints of specificity erased, an unsettling but fitting environment for the man who uses blank digital canvases to make the unreal real.

Back to the remake-or-not question.

”West Side Story has been performed thousands of times all over the world, and each time it was performed, even though the text is the same, the actors and the directors and the designers, every West Side Story ever produced for the stage has been a different interpretation,” he continues, smiling but also matter-of-fact. “So I felt absolutely no guilt or anything that I was doing anything to step onto the toes of Bob Wise’s movie, because we drew all our inspiration from the original source material.”

Okay, so Spielberg’s West Side Story is a “reimagining” of the Broadway work conceived by Robbins, musician Leonard Bernstein, lyricist Stephen Sondheim and writer Arthur Laurents. The film’s official press notes sometimes contradict this – “The word that Spielberg was interested in remaking the film had been circulating in Hollywood and on Broadway for several years, as it was widely understood how much the director loved the property” goes one line, while another section quotes the Bernstein’s siblings Alexander and Nina saying, “we were so honoured that Steven Spielberg was going to remake the film” – but that can be chalked up to the fuzzy through-line of just what role originality plays into Spielberg’s oeuvre.

His Indiana Jones films are riffs on the Saturday morning serials and Allan Quatermain pulp. Close Encounters of the Third Kind and E.T. are serious-minded reworkings of B-movies. War of the Worlds has its obvious antecedents. And what is Jurassic Park if not a dino-sized update of Westworld (though I suppose author Michael Crichton is

more responsible there). It is also not as if West Side Story is, or isn’t, Spielberg’s first remake – that honour belongs to his 1989 romantic fantasy Always, based on 1943′s A Guy Named Joe.

What is certain, no press notes needed, is that West Side Story is Spielberg’s very first musical. After a lifetime of dramas, thrillers, fantasies, horror and more, the man has somehow never touched what is, on paper, the most Spielberg-y of genres.Musicals are big, expansive canvases for moviemakers who are also, unlike certain directors, hopelessly incurable movie-lovers: all soaring emotion and bright visuals. Spielberg had plenty of practice in the area – he wrote the score for his first amateur film, 1964′s Firelight, and long-time collaborator John Williams once said that the director could’ve been a composer in another life. So, politely, what took him so long? 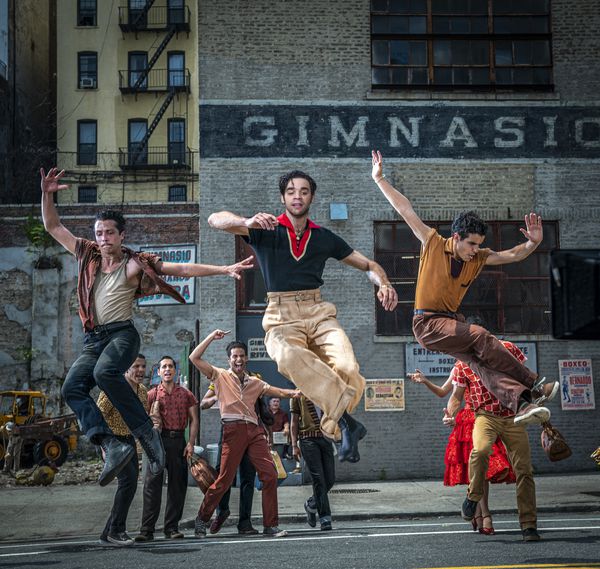 Spielberg’s West Side Story is a ‘reimagining’ of the Broadway work.Photo by Niko Tavernise/20th Century Studios

”Courage, the lack thereof,” Spielberg says with another laugh. “I just thought that it was a genre that was something I needed to kind of earn my stripes for. I needed to get to a certain point in my life, my career, where I could take the biggest leap I’ve ever taken off the largest cliff I’ve ever stood in front of to be able to do a full-on motion-picture musical.

”As you know, I’ve made movies in every genre imaginable, and the press has been asking me probably since E.T., ‘What haven’t you done?’ I’ve always maintained that I’ve never done a musical and have always wanted to. I’ve developed four or five musicals over the last 40 years that I never did. I tried to turn Hook into a musical! Nobody knows that there were nine songs, written by John Williams and Leslie Bricusse, that I threw out at the last minute.”

When the opportunity finally came to get the rights to West Side Story, Spielberg felt he had “earned the right after such a lengthy career to take a big leap. … It was being able to exorcise any fear of failure. I got to a point in my career where I can say failure is an option. But I’m still going to take that chance because I love West Side Story so, so much.”

It is beyond safe to say that Spielberg’s West Side Story contains not a whiff of failure. By reteaming with trusted collaborators – screenwriter Tony Kushner penned Munich and Lincoln, cinematographer Janusz Kaminski has shot every Spielberg film since 1993′s Schindler’s List – and assembling a sizzling cast of young, mostly new-to-the-screen faces (the biggest name is Baby Driver’s Ansel Elgort, who plays Tony), each of whom are put through the paces by acclaimed choreographer Justin Peck, Spielberg has created a pure pleasure machine that plays like the platonic ideal of what Hollywood moviemaking is all about.

Spielberg has in the past insisted that he has no “personal style” – but West Side Story is everything that we’ve come to know a Spielberg movie can be, delivered with the virtuosity of a man who makes the impossible look effortless.

After Schindler’s List, Spielberg said that he felt a “responsibility … I want to go back and forth from entertainment to socially conscious movies.” Practically, this played out as one The Lost World: Jurassic Park for every Amistad, a War of the Worlds for a Munich. But West Side Story feels, more than any of his 21st-century output, the closest amalgamation of these twin desires.

Unlike the 1961 adaptation, the 2021 West Side Story makes a point of casting exclusively Latinx performers for every Shark character (and also invents a supporting role for Rita Moreno, the only Puerto Rican-born performer to have a major part in the original film). What’s more: Spielberg forgoes subtitles whenever the characters are speaking Spanish – which accounts for roughly 40 per cent of the total onscreen dialogue.

“At the very outset, Tony [Kushner] and I decided to have respect for their language and not build a crutch for their language by kind of surrendering to popular opinion that we need to know every single word that’s coming out of anybody’s mouth in a movie we’re seeing,” Spielberg says. “We wanted to respect the Spanish language, respect all the characters playing Puerto Ricans, and let the audience figure out what they’re saying on their own.”

”It’s very interesting seeing it with an audience – you get whole pockets of laughter from people who speak Spanish,” he continues. “But we were very careful that the Spanish used here is something that’s in an emotional moment that you can presume the meaning of, and you’ll be 80 per cent right. It pulls you into it.”

The director has a habit of doing that, pulling you in. Yet West Side Story might not remain his apex-Spielberg movie for very long.

Next year, the director is set to release The Fabelmans, a coming-of-age drama written by himself and Kushner about a movie-mad kid growing up in Arizona. A kid who sounds an awful lot like Steven Spielberg. There is no word on whether the film will feature a scene with a 10-year-old Lil Steven dancing around to the soundtrack of West Side Story. But we will all be watching.

West Side Story opens Dec. 10 in theatres across Canada.

Plan your screen time with the weekly What to Watch newsletter. Sign up today.

‘Everything is real’: Gloria Estefan on the story behind ‘On Your Feet!’