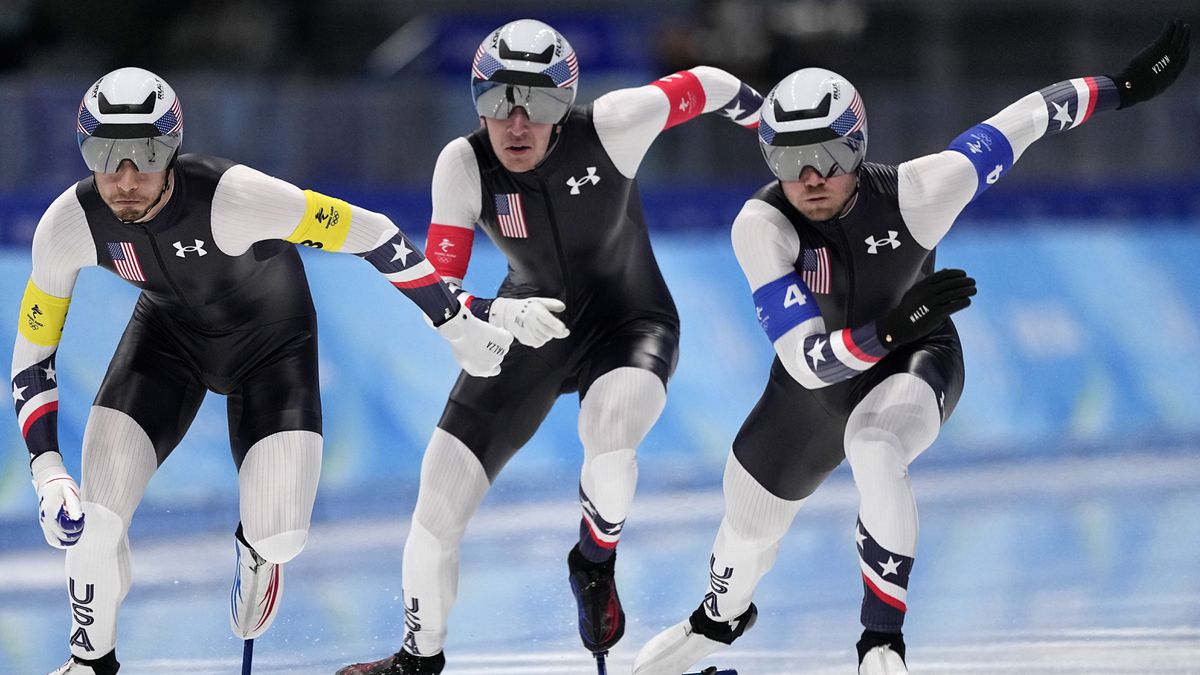 An Oak Park native who trained in the past with the Franklin Park Speedskating Club, Lehman earned a bronze medal Feb. 15 as part of the Team USA squad in the team pursuit event. Lehman and his teammates raced past the Netherlands for only the second medal the U.S. has ever won in team pursuit, a speedskating event which debuted at the 2006 Olympics.

The team pursuit is a 3,200-meter race where two teams of three skaters each compete for eight laps on the 400-meter oval rink.

A sense of relief accompanied the celebration in Lehman’s family after he fell short of medaling in his previous Olympic races.

David Lehman explained that the team pursuit event had three rounds, with the first, or semifinals, taking place Sunday, Feb. 13. Out of eight teams that were timed, the USA came in second, after Norway, which set a new Olympic time record. The Russian Olympic Committee and the Netherlands came in third and fourth.

The second round, or quarter-finals, took place Tuesday, Feb. 15, with the USA racing against the ROC.

In that third and final round, just a couple of hours later than the second round, Team USA switched out skater Ethan Cepuran for Joey Mantia, who was fresh because he hadn’t yet skated that day. Emery Lehman and Casey Dawson competed in all three rounds. Because all four skated in competition, though, all four got medals.

The team pursuit was Lehman’s third event at the 2022 Games. He had been scheduled to compete in the 1,500-meter event, and finished 11th out of 30 skaters. But when Dawson’s arrival in Beijing was delayed due to a positive COVID-19 test, Lehman filled in for him in the 5,000-meter race. With little practice time, he finished 16th. Lehman also participated in the 2014 and 2018 Winter Olympics.

Savoring his bronze, Emery Lehman again reflected on his experiences in Beijing in an edited e-mail interview with the Pioneer Press/Chicago Tribune:

How did the Team Pursuit go in terms of performances?

Lehman: “We were all very happy with how we preformed and think we put together three amazing races. We had three of the fastest Team USA Team Pursuits that have ever

been skated at sea level. Our semi-final round was the second fastest ever at sea level behind the Russians, who record skated in the same race as us.”

Did everyone step it up a bit down the stretch in the race against the Netherlands?

Lehman: “Yeah, after being advanced to the bronze medal round, we knew we were fighting for a bronze. Not initially our goal, but still a medal. So we had to reevaluate our goals, but still stick to the same strategy and skated the race we knew we could to get the job done.”

How does Team Pursuit exactly work, and play out?

Lehman: “It is a three round system. The first round is just to rank the eight teams. Then in the second round, the top four move onto the semi-finals rounds (which is like a knockout bracket style by ranking, one vs. four and two vs. three) while the other four advance to the C and D finals, respectively, based on ranks. On the final day the last two rounds are skated within two hours of each other.”

For your standards, is coming away with any medal in the Games satisfactory?

Lehman: “Yes. Four years ago, if you told me I would have a medal, I would have been over the moon. Even two years ago. Now looking back, I don’t see what we could have done to have done better in the second round to beat Russia. They skated amazing, and in the first round I think we maybe could have grabbed the one seed if we started out a little faster initially. I am very happy with an Olympic medal. Four years ago we finished last in this event.”

When did you first hear from your parents post-race? Was there a sense of relief after three Games, you finally medaled?

Lehman: “Yes, there was a big sigh of relief after we medaled, I spoke to my parents on the phone briefly after, but not in length really until I could get to the Olympic Village. After the race, we were rushed through the in-venue award ceremony, media, a very short press conference, and then back to the village to change and get right back in the car for the award ceremony in the medal plaza. It was a very busy night. I didn’t sleep at all after. I think I fell asleep by 10 a.m. the next day.”

How many messages did you get from back home when the news broke?

Lehman: “I got so many messages and loved them all. I can’t even count, I am still getting quite a few, which feels great.”

Do you expect a good reception from Oak Park now that you have finally medaled?

Lehman: “Yeah, I’ve always had a good reception from Oak Park, regardless of having a medal or not. I can’t wait to share it with them and the people who appreciated my accomplishment all the way up until now.”

Has the bronze initially affected your future competitive plans?

Lehman: “It has had no effect. I was (scheduled) heading to Norway on Feb. 21 for the World Championships, and to the Netherlands after that for the World Cup final. Then, after a short off-season and some rest, we are starting back up in early April for next season.”