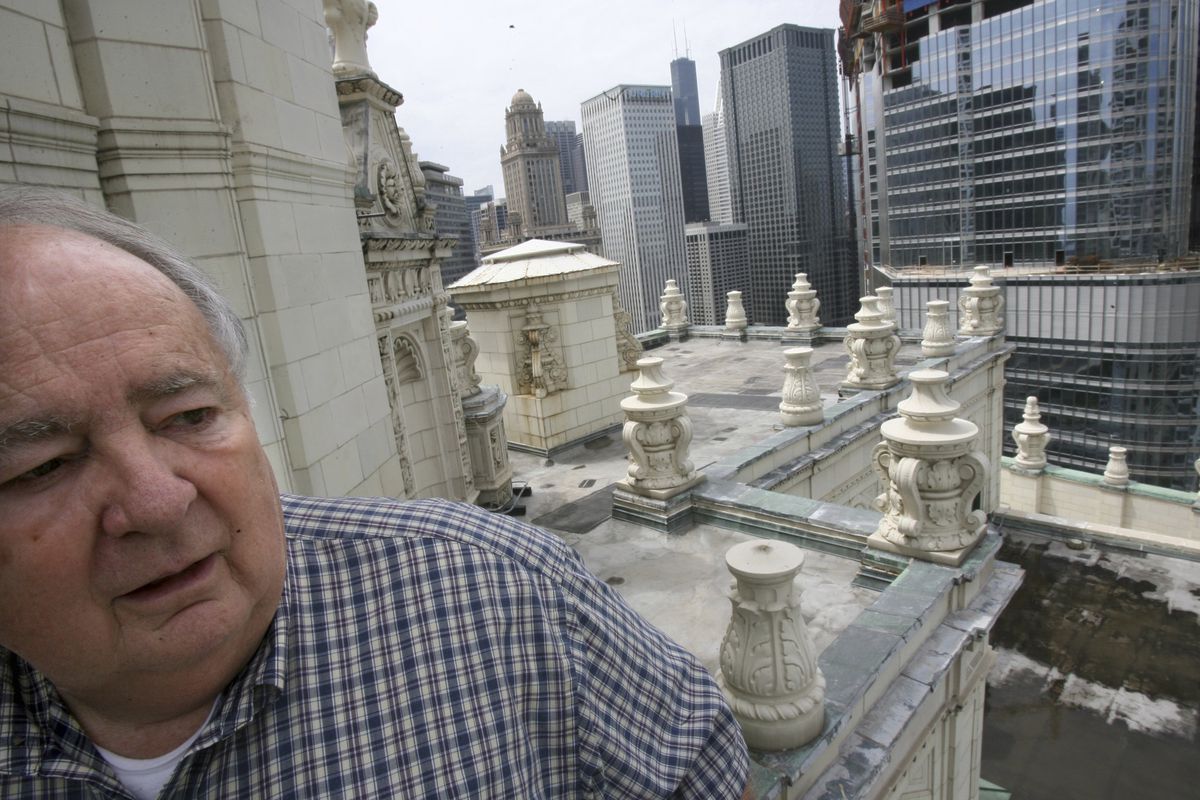 Many years ago, sitting in his office high atop the Wrigley Building, Mike King was telling me about the many people he had worked with in his long career as a sound engineer — a star-studded crowd that included Jonathan Winters, Burgess Meredith, Bob Newhart, Ellen Barkin, Dionne Warwick, Ella Fitzgerald, Bob Hope and, of all people, Richard Nixon.

There were dozens more, because for decades King was one of the most successful, prolific and admired sound engineers in history.

John Michael King died Jan. 16 at a nursing facility in DeKalb. He was 85 years old.

Mike King was the founder and owner of Audio Recording Unlimited in the Wrigley Building, May 25, 2007. (Charles Osgood / Chicago Tribune)

“I was there every day,” said his wife, Susan, the mother of two of his seven daughters. “We would talk and remember, and he delighted all the nurses and staff up until the very last day. He was charming until the end.”

His death made me recall that long ago day in his office and his story of “Chickenman.”

For those of a certain age, this character is firmly embedded in memory. To the accompaniment of “He’s everywhere! He’s everywhere!” the character was a daily radio serial born on WCFL-AM’s Jim Runyon show in 1966, a clever satirical spoof of the then-popular “Batman” TV show.

It was created and voiced by Dick Orkin, the station’s production director, and was so popular that it was eventually syndicated and twice revived after its initial run. There were 273 original episodes, some of which have been played on NPR’s “This American Life,” and many of which can still be heard on various stations internationally.

King said proudly, with a twinkle in his eyes at the realization that this might be the hallmark of his considerable professional legacy, “I did most of the engineering for ‘Chickenman,’ and I can listen to each episode today and know exactly what I was doing at that time.”

He closed his eyes and after a quiet moment said, “Sound doesn’t just have the ability to set an image. It can take you back in time.”

King was the son of Alice and Albert “Bud” King, born in 1936 and raised in an Ohio town he described to me as “no bigger than the size of your hand,” (it was named Navarre, in Amish country south of Akron) and could remember the exact moment he fell in love with radio.

It happened when he was directing a high school play — the name lost to history — and visited a local radio station seeking sound effects equipment to embellish the show.

He was, he said, “I was in awe of the equipment and what it was able to do.” And it was there he found a career, starting to work for that station while still in high school and after a few years moving to a radio station in Cleveland where he worked as engineer for one its top DJs.

He was married by then to his first wife, Mary, and the couple and their four daughters — Debbie, Kathy, Margie and Michelle — moved from Cleveland to

Chicago, where another daughter, Melissa, was born and he worked for WCFL, which was then engaged in a heated rock ‘n’ roll radio war with WLS.

Those were exciting and freewheeling days. But eventually, as King said, “because I was 40 and getting tired of working for people who looked and acted like they were 16,” he became a commercial production engineer, working for Joy Recording, and began creating sound for radio and TV commercials. From there he went to Universal Recording and its newly opened studios in the Prudential Building. In 1975, he became among the first hires at the then new Chicago Recording Company, running its postproduction studio.

He was by then divorced and had met the woman who would become his second wife, Susan McDowell, when they both worked at Universal. The couple lived in the northwest suburbs, where they raised two daughters, Allison and Lizzie. When the girls were of school age their parents worked together downtown.

He had done considerable work making commercials for the Wm. Wrigley Jr. Company and became friendly with its president, P.K. Wrigley, and his son Bill when they asked him to do some work at their Lake Geneva home. As the story goes, Bill asked King, “If you were ever to go into business for yourself, where would you build your facilities?”

And so, in 1988 King did King open his Audio Recording Unlimited. It began modestly, with two studios on one floor of the Wrigley Building, in a space that had previously been used as a storage area. He had three employees.

In time his operation grew to occupy parts of five floors, and he had a dozen or so full-time employees. The company made thousands of commercials for radio and television, for movies and corporations. It housed a library of some 300,000 musical themes and something in the neighborhood of 100,000 sound effects.

It was a wonderful space, with glorious views of the city and river below.

“I owe all this to radio,” he said, looking out over the city and river.

Spending time with King, it was easy to understand how he was successful with demanding clients and sometimes mercurial voice-over actors. He was charming and funny but also meticulousness and creative. As more than one former client said, “Mike King played his audio console like a concert pianist.”

He sold ARU in 2008 to two of the firm’s longtime engineers, Mark Zeboski and Don Arbuckle, who continue in business.

In retirement King remained active after he and his wife moved to Genoa.

“We remained close to Mike’s first wife and his daughters,” said Susan. “And Mike so enjoyed time with his grandchildren.”

The couple were members of Hope Lutheran Church, 1660 Checker Road in Long Grove, where a memorial will be held at 11 a.m. Feb. 26.

For all of his success, I sensed a wistfulness about the early days of his career, the bygone days of radio when he told me, “When I started and through those early decades, radio was magic then. There wasn’t any sort of format. The DJs had to be creative, had to entertain. We all did.”