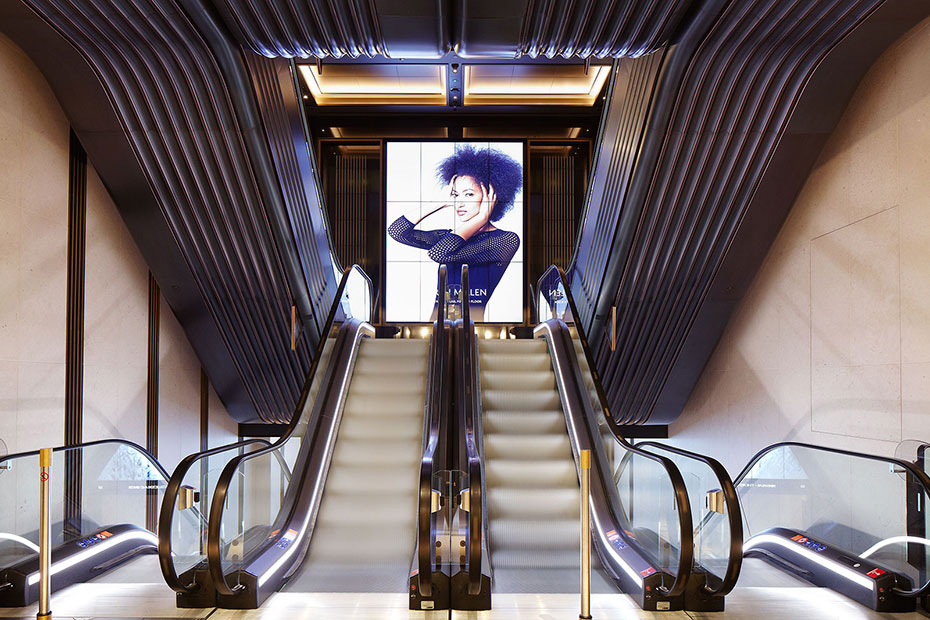 The scope of an historically significant project

This store’s building has a notable background, it is Grade II listed and is where the first escalator, known then as a moving staircase, was introduced in 1898 . Against this history it seems completely fitting that this latest design scheme is based on the former glory of the escalator hall, as it can be seen in the 1935 black and white photograph.

The project included the redesign of the hall, lift cars and staircase and the replacing of the sixteen escalators . The design work began in February 2015 and was a two-year project with a 10-month build time. It was an exacting project as the store had to stay open throughout the works and a logistical challenge as vertical circulation had to be maintained.

Regine Kandan, partner at Make Architects, was involved from the very beginning of the project.

Regine says “To achieve this we refurbished the stairwell first so that customers could still navigate the floors whilst the work on the escalators was being carried out. The lift was also being refurbished so a temporary lift-car was fitted which enabled the work on the escalators and the original lift-car to be completed at the same time. The old escalators were shut down but a landing was maintained on all floors. The works were carefully phased as it had to be done at night-time and that meant there were a lot of night inspections for us architects!”

New ceilings and new floors were put in as part of the refurbishment. As the project schedule was so tight there could be no downtime waiting for goods to arrive on site so the supply was carefully sequenced. Nothing could be stored on site either, it was brought in from a Harrow warehouse and by the time the store opened each morning all the work carried out during the night was hidden from sight by protective matting.

Regine told us “I heard about PVD stainless steel as it is being specified for another project of ours in Sydney, Australia. We are designing the upgrade of the railway concourse there at Wynyard Station, 1 Carrington Street.

PVD had the qualities we needed and was of the upmarket feel and the precious look that we wanted. Fundamentally we needed a finish that conveyed some of the special “upmarket store bling” and, in our opinion, PVD does just that! The colour options of the PVD were great for us. We were working from old black and white photos so we had to be imaginative about the exact finish colours but we knew the palette had to reflect a sense of the Art Deco. We used two types of stone, a white marble and a black marble which had a gold, caramel vein with which the Almond Gold PVD harmonised perfectly.

Mirror polish almond gold PVD was used for entrance portals doors to give a welcoming and luxurious feel.

These two properties were of crucial importance, according to Regine “We discovered that PVD had two key properties that we wanted. The first one was that it was possible to apply an additional nano-coating which created an anti-fingerprint surface making it easy to just wipe clean. This was especially important as we specified mirror finishes for many of the areas. The second was that the micron thickness of the PVD coating could be increased

to make the surface even more durable so that it would not scratch easily.

Another reason to ensure that PVD was suitably robust is that it needed to stand up to the store’s regime.

There is a department called TSD – or Technical Store Development – within the store. This is made up of a team of project managers who patrol the store every morning and all aspects of the interior are taken very seriously as it is considered to be an integral and essential part of their brand. So, to sum up, we needed longevity and robustness with the least maintenance possible.”

Working together to achieve a robust specification

Regine told us “We had to be very sure of the product as it was essential that it could successfully withstand the wear and tear of the busy thoroughfare. We worked closely with April especially in the early part of the project when sampling was crucial in order to make selections.

It was really important to learn everything possible about the material as we are ALWAYS robustly challenged on our specifications during the “value engineering” stages. We have to be able to defend our choice and e clear whether it is needed or just ‘nice to have.’ Sure enough we were challenged over the PVD but we stood firm that it was essential to our scheme and that no other finish could give us both this look and durability. Without having had all the technical back up from JDL we would not have been able to present sufficient argument for keeping it in the spec.
This is where the technical information that April, from John Desmond, gave me was invaluable and also the examples of where the material had been successfully used previously in the Middle East where the environment is extremely challenging, I could see, and then demonstrate, that it had been used for entrances to large shopping centres and public space.

The maintenance of the material was very important – we had to justify our selection. The cleaning regime was critical and we had to to ensure there were no surprises a year down the line when materials can manifest unexpected flaws which we haven’t been told about.

We did carry out some economies – detailing that was further away from the eye were treated as less important, for example, lighting ledges, and these we swapped for a painted finish as they could not be seen up close. All the areas that customers would come into close contact with are in PVD.

Before we discovered PVD we had considered other materials and finishes. Firstly we looked at powder coat which was affordable but had no reflectivity being quite matt and dimply in texture and doesn’t really have the prestigious aura we were aiming for. We looked at metallic paint but this was expensive and not suitable for all of the trims and facings we had specified. Whatever material we specified had to to stand up to close inspection and still be just as luxurious on an up-close look. We considered anodising however the anodising bath sizes were too small for the size of the panels we wanted to specify. With PVD stainless steel we could create large panels, so, along with all the other benefits it was far and away the most suitable option for us.”

The escalator hall in 1935, the inspiration for the design of the upgraded hall. Foreign Currency – A STORY FOR GLORY #71