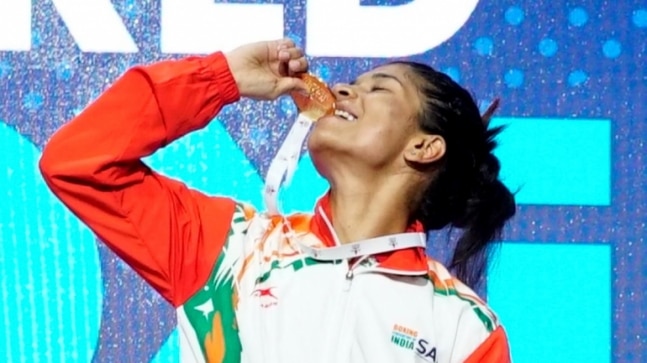 “Who is Nikhat Zareen?” Legendary Indian boxer Mary Kom had famously asked this question when the young Telengana boxer demanded a trial for the Tokyo Olympics. Mary got an automatic ticket to the world championships in 2019 and when she was given a similar route to the Tokyo Olympics, Nikhat, who competes in the same weight class, contested it and fought for a trial.

Nikhat did not win the much-publicized trial, as Mary Kom outpunched the Telengana boxer in 2019 to book a ticket to the Tokyo Olympics.

But Nizkhat did not throw in the towel. In fact, she never has, in her life. The gutsy boxer from Telengana won a Youth World Championships gold medal when she was just 15. But competing in the same flyweight category as Mary Kom wasn’t easy. Mary, a legend of the sport, had dominated the weight class over the years, winning as many as 8 medals in the world meets, including 6 gold medals.

NIKHAT IS A WORLD CHAMPION

Nikhat always had to battle to emerge out of Mary’s shadows. She was in good form in the lead-up to the Tokyo Games, winning a gold medal at the prestigious Standja Boxing Memorial Tournament and won a silver medal at the Asian Championships.

But Nikhat missed the bus to Tokyo. A year later, Nikhat answered all the questions.

Who is Nikhat Zareen? She is a world champion.

“Is my name trending on Twitter?” is the first question Nikhat asked when she met the press on Thursday. Well, it did.

With Mary Kom opting out of the major events in 2022, including the world championships, it was an opportunity for Nikhat to walk the talk, finally. And she did that in style.

Nikhat Zareen on Thursday, May 19 became only the 5th woman boxer from India to win a gold medal at the World Championships. More importantly, she is only the 2nd Indian woman boxer after Mary Kom to win a world meet gold medal outside India.

Nikhat was at her dominant best in the final against Thailand’s Jutamas Jitpong 5-0. In fact, Nikhat won each of her 4 bouts by unanimous decisions, asserting her dominance in the weight class in Istanbul.

Nikhat has had a fine run in 2022. The 25-year-old became the first Indian boxer to win more than one gold medal at the Standja Boxing Memorial Tournament and carried the form to Istanbul to bag the world title.

Proving naysayers wrong is nothing new for Nikhat Zareen. She began her foray into sports by specialising in 100m and 200m sprints but a visit to the nearby sports complex with her father changed it all. Seeing only boys taking part in boxing, Nikhat asked her father a question. Her journey took a different direction from then on.

When people in her town had told her “Boxing Mardo Ka Game”, Nikhat didn’t believe it. Instead, she set out on a journey to quash misconceptions.

“Once I went to a stadium, I saw Urban Games were going on. I saw girls in every sport except boxing. Then I was curious to know why there were no girls in boxing. I asked my father ‘papa, sab game mein ladkiyon hai but boxing mein kyu nahi hai? Bas mardo ka game hai kya?’.

“He said ‘no beta, girls can also box, but people think girls don’t have guts to box’.

“I belong to a place where very few people allow their daughters to achieve their dreams in sport. I took those words as a challenge, then I decided to take up boxing.

‘WILL DO MY FATHER PROUD’

Nikhat, who has set her sights on Paris 2024, is always grateful for the support she had received from her father, Mohammad Jameel Ahmed. Winning an Olympic medal is the biggest gift that she can give her dotting ‘papa’.

“Every girl deserves a father like mine,” she said.

“At the start, it was challenging for me and my father because people around us were saying all sorts of stuff. But my father never listened to all that. He supported me in my journey. That’s why I have always been saying that I am lucky to have such a father.

“One day, I will make him proud by winning an Olympic medal.”

The spotlight will now be on Nikhat Zareern. With Mary taking a backseat, the nation’s hopes will be pinned on Nikhat. But the young pugilist, who had spent time waiting in the wings for long, will only cherish the attention and use it to strengthen her journey towards the Paris dreams.