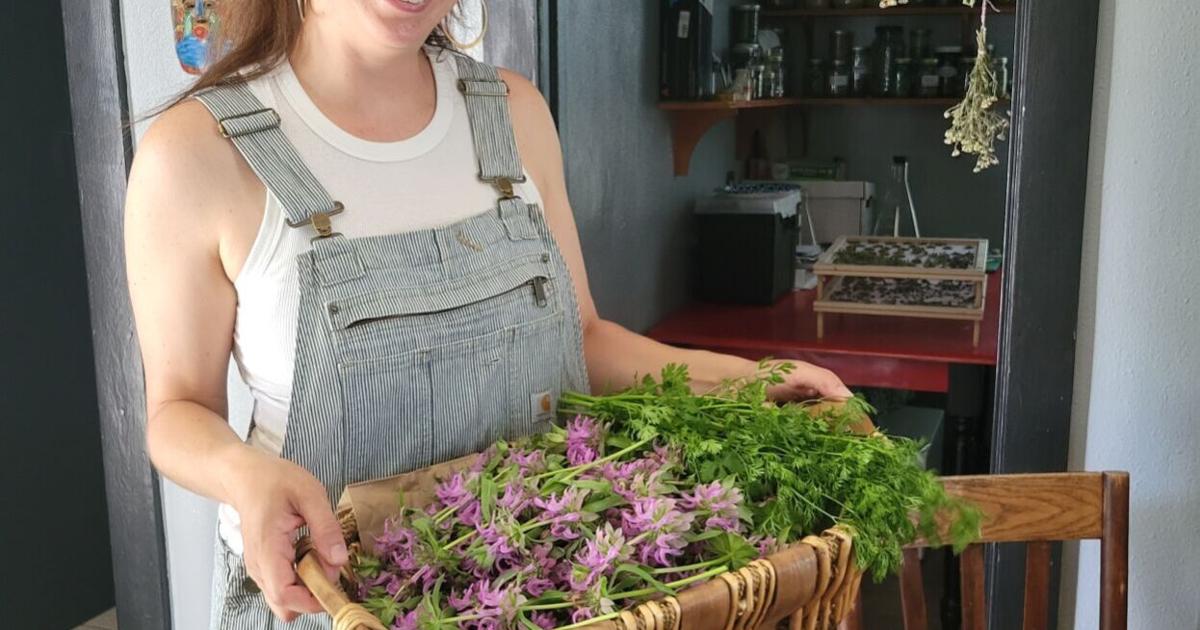 Off the downtown path on the south end of Mason City sits a home on South Harding Avenue. This home, which belongs to Karon Trejo, has been turned into an herbal apothecary.

Trejo got the idea to open Morning Glory Apothecary when visiting her grandmother. She has 10 years of herbalist experience, and after moving to Mason City, she saw a need for more traditional remedies to common ailments. When she visited her grandmother, a woman named Gloria who loved gardening, for the last time before her death, Trejo felt the push to begin.

“She reignited my passion for this, and I started this apothecary as kind of an ode to her,” Trejo said.

Trejo asked her grandmother to visit her in her garden. Every time she sees a hummingbird, she feels her saying hello. And the brand name, Morning Glory Apothecary, also stands in tribute to her grandmother.

A hummingbird came to eat from the purple bee balm as Trejo walked around her apothecary garden, showing a wide range of vegetables and herbs she uses for teas, tinctures, elixirs, balms and other remedies. Though there are common herbs in the garden, such as lavender and calendula, Trejo enjoys growing more uncommon vegetables in her garden space.

“I’m probably out here two hours a day just harvesting right now,” Trejo said, pulling ground cherries and long beans from the garden. She showed how quickly some plants need to be harvested before the ripeness fades and the crop is lost. Even after harvesting large amounts of calendula, there were flowers that had dried out two days after blooming from the August heat.

What Trejo harvests goes onto several drying racks throughout her space. Different parts of herbs are utilized for products, so Trejo separates the stems and flowers of herbs for what is usable. After drying, the herbs may be used in a number of ways.

“My favorite part of the process is formulating. I love figuring out what I want a product to do and finding herbs that will work for that end result.” Trejo said she also enjoys working with clients seeking more traditional treatments for common issues.

Herbs have many different effects on the body, from helping to oxygenate the blood to calming the nervous system. Trejo said

between different aversions people may have to tea or the alcohol in tinctures, she can help find solutions that allow clients to be comfortable integrating the herbs.

Some of her favorite herbs in the apothecary are chamomile, yarrow, plantain, lemon basil and mullein. During the summer she integrates more spearmint into her products for its cooling effect. For those interested in gardening and herbs, but aren’t sure where to begin, Trejo lends some advice:

“I often suggest that people start with using herbs culinarily. People should try the herbs on foods they’re already comfortable with if they aren’t used to tinctures or teas.”

Trejo makes a variety of herbal blends, hair and beard oil, granola, lip balm, bug repellent, salves, tinctures, drinks and more in her shop. Trejo has brought her products to the Mason City Farmers Market for most of the summer and considers this a successful first year of business.

For the fall season Trejo plans to move into some cozier products like bath salts and teas. Looking around at the backyard filled with flowers and leaves, Trejo said she gets lost in the bees that pollinate her plants. Planting her garden for the first time has been a long process; Trejo found the soil type wasn’t conducive to the no-till style she wanted to use and had to till for her first season. After listening to gardening recommendations, she learned quickly what the plants liked for space and shade.

“It’s funny to say, but plants really do talk to you. If you see a plant wilting, it’s asking for water,” she said.

With Trejo’s plants blooming in the intense heat of August, she’s learned quickly which plants need more shade throughout the day and which ones like the sun more than their directions may say. Trejo said in her experience, people have begun going back to the garden to find other sources since supply chain issues began. And because there are so many mini-ecosystems within a climate, the best thing a gardener can do is learn on the job.

“You can only do so much research before you just have to get out there and start learning from experience,” Trejo said.

Rae Burnette is a GA and Crime & Courts Reporter at the Globe Gazette. You can reach her by phone at 641.421.0523 or at [email protected]

Amazon books mp3 downloads Someone Who Will Love You in All Your Damaged Glory: Stories