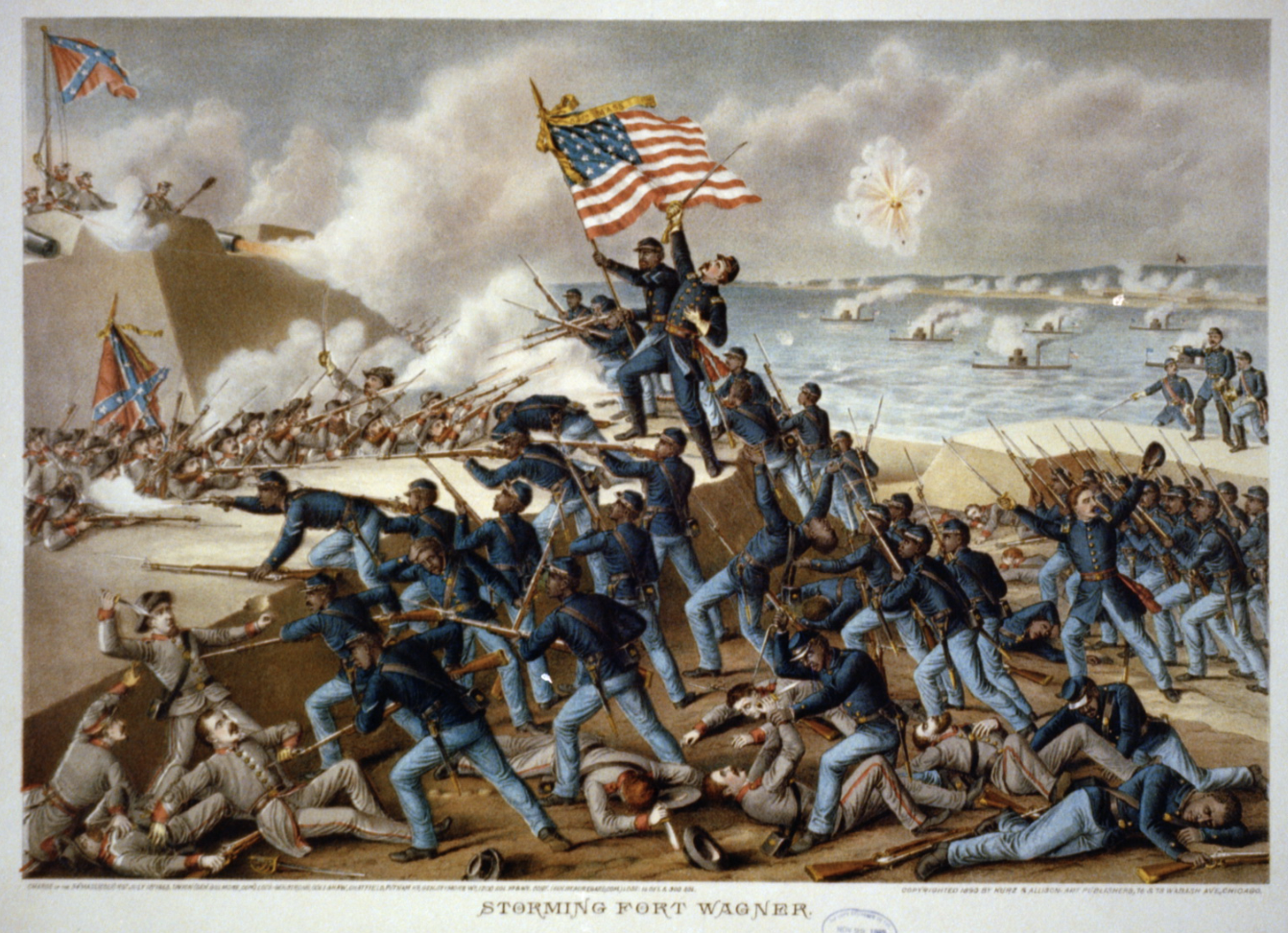 July of 1863 was a critically important month during the Civil War. During the first three days of July, two great armies clashed at Gettysburg, resulting in a decisive Confederate defeat. On 4 July, Vicksburg, the last Confederate bastion on the Mississippi, surrendered to Maj. Gen. Ulysses S. Grant. Both were great Union victories that ultimately helped to restore the Union.

But there is a lesser known battle that occurred on 18 July of that year: the Union assault on Battery Wagner, one of the forts defending Charleston Harbor. Although a Union defeat, it marked a major milestone in the history of the United States: the transition of African-Americans from servitude to citizenship.

The assault of the 54th Massachusetts Regiment, one of the first all-black units of the Civil War, was portrayed in the movie Glory. Suffering a casualty rate of 40 percent, the performance of the 54th illustrated the fact that African-Americans were willing to fight—and die—for their freedom. Accordingly, the 54th Massachusetts constituted the vanguard of a force of African-Americans that would help save the Union and end slavery.

The former slave and great abolitionist Frederick Douglass had called for arming blacks at the very outset of the war. Writing in his Monthly of May 1861, Douglass argued that the way “to put an end to the savage and desolating war now waged by the slaveholders, is to strike down slavery itself, the primal cause of that war.”

Abraham Lincoln would come to share Douglass’s view regarding the psychological impact of enlisting black troops in the Union cause. But in the beginning, Lincoln was constrained by prudential considerations: His hesitation regarding both emancipation and the arming of black soldiers was based on his need to maintain a working coalition between his anti-slavery Republican Party and “War Democrats,” who were willing to fight to restore the Union but who did not want to interfere with slavery.

Congress authorized the enlistment of black troops by means of two pieces of legislation: the Second Confiscation Act of July 17, 1862; and the Militia Act of July 12, 1862.  But even with congressional authorization, the black-recruitment enterprise had to overcome a great deal of resistance, including the prejudices of many Northern whites. Among the contradictory arguments put forward by those who opposed the policy were: that blacks would not enlist in the first place; that they were too cowardly to fight; that arming them would unleash their “savage nature”; that they lacked the intelligence to be good soldiers; that whites would not serve alongside them; that their presence would demoralize white Union soldiers; and that arming them would stiffen the backs of the rebels.

In addition to facing the prejudice of white Union soldiers, black soldiers faced a special danger from the Confederates, who saw them (including free blacks) not as soldiers but rather as escaped slaves engaged in servile insurrection (and their white officers as inciting servile insurrection). The Confederate Congress made this crystal clear in its joint resolutions of April and May 1862, prompting Lincoln to issue an Order of Retaliation.

In 1892, Norwood Penrose Hallowell, the colonel of the 55th Massachusetts, captured the meaning of what the black soldier had, against great odds. accomplished during the war: “We called upon them in the day of our trial, when volunteering had ceased, when the draft was a partial failure, and the bounty system a senseless extravagance. They were ineligible for promotion, they were not to be treated as prisoners of war. Nothing was definite except that they could be shot and hanged as soldiers. Fortunate indeed it is for us, as well as for them, that they were equal to the crisis; that the grand historic moment which comes to a race only once in many centuries came to them, and they recognized it.”

Although Glory is important for opening the eyes of Americans to the role of African-American soldiers in the Civil War, the movie conveys some historical inaccuracies. The most serious is the portrayal of the 54th as made up largely of runaway slaves like John Rawlins (Morgan Freeman) or Private Trip (Denzel Washington) was in fact, a regiment of freedmen, like Thomas Searles (Andre Braugher), recruited not only from Massachusetts but also from New York and Pennsylvania. Two of Frederick Douglass’s sons were among the first to volunteer for the 54th and Lewis Douglass, the elder son, served from the outset as the regiment’s sergeant-major.

But that inaccurate portrayal actually conveys a deeper truth, which is illustrated by a story recounted by the Greek historian Herodotus. At the beginning of Book Four of The History, Herodotus tells of the return of the nomadic Scythians from their long war against the Medes, during which time the Scythian women had taken up with their slaves. The Scythians warriors now find a race of slaves arrayed against them.

Having been repulsed repeatedly by the slaves, one of the Scythians admonishes his fellows to set aside their weapons and take up horsewhips. “As long as they are used to seeing us with arms, they think that they are our equals and that their fathers are likewise our equals. Let them see us with whips

instead of arms, and they will learn that they are our slaves; and, once they have realized that, they will not stand their ground against us.”

The tactic works. The slaves are bewildered by the whip-wielding Scythians, lose their fighting spirit, and flee in terror. The implication of Herodotus’s story is clear. There are natural masters and natural slaves. A slave has the soul of a slave and lacks the manliness to fight for his freedom, especially if a master never deigns to treat him as a man.

At the time of the Civil War, most Southerners believed that blacks were naturally servile. The Scythian view was reflected in a comment by Howell Cobb of Georgia: “The day you make soldiers of [Negroes] is the beginning of the end of the revolution. If slaves will make good soldiers our whole theory of slavery is wrong.”

But there was doubt about their manly spirit in the north as well. Even supporters of the effort to raise black troops expressed uncertainty. In Glory, a reporter from Harper’s Weekly says to Matthew Broderick’s Col. Shaw, “will they fight? A million readers want to know.” Shaw replies, “a million and one.” In this scene, Broderick’s Shaw is paraphrasing a letter from Captain William Simpkins of the 54th Massachusetts, written just before his death during the regiment’s assault on Battery Wagner: “this is nothing but an experiment after all; but it is an experiment that I think it is high time we should, try — an experiment which, the sooner we prove fortunate the sooner we can count upon an immense number of hardy troops that can stand the effect of a Southern climate without injury; an experiment the sooner we prove unsuccessful, the sooner we shall establish an important truth and rid ourselves of false hope.” This illustrates the fact that in 1863, even elite New England abolitionists were uncertain of their abilities as soldiers.

While the material contribution of African Americans, both freedmen and former slaves, to Union victory was substantial, their participation in the war to achieve their own liberty was important for its own sake: to make it clear that they were not the natural slaves that Southerners, and indeed many Northerners, believed them to be. “Who asks now in doubt and derision, ‘Will the Negro fight?’” observed one abolitionist after the assault of the 54th against Battery Wagner. “The answer is spoken from the cannon’s mouth…it comes to us from…those graves beneath Fort Wagner’s walls, which the American people will never forget.”

Mackubin Owens is a Senior Fellow at the Foreign Policy Research Institute. He previously served as editor of Orbis: FPRI’s Journal of World Affairs (2008-2020). From 2015 until March of 2018, he was Dean of Academic Affairs and Professor at the Institute of World Politics in Washington, D.C. From 1987 until 2014, he was Professor of National Security Affairs at the US Naval War College in Newport, Rhode Island.

He is also a Marine Corps veteran of Vietnam, where as an infantry platoon and company commander in 1968-1969, he was wounded twice and awarded the Silver Star medal. He retired from the Marine Corps Reserve as a Colonel in 1994.

Owens is the author of the FPRI monograph Abraham Lincoln: Leadership and Democratic Statesmanship in Wartime (2009) and US Civil-Military Relations after 9/11: Renegotiating the Civil-Military Bargain (Continuum Press, January 2011) and coauthor of US Foreign Policy and Defense Strategy: The Rise of an Incidental Superpower (Georgetown University Press, spring 2015). He is also completing a book on the theory and practice of US civil-military relations for Lynne-Rienner. He was co-editor of the textbook, Strategy and Force Planning, for which he also wrote several chapters, including “The Political Economy of National Security,” “Thinking About Strategy,” and “The Logic of Strategy and Force Planning.”