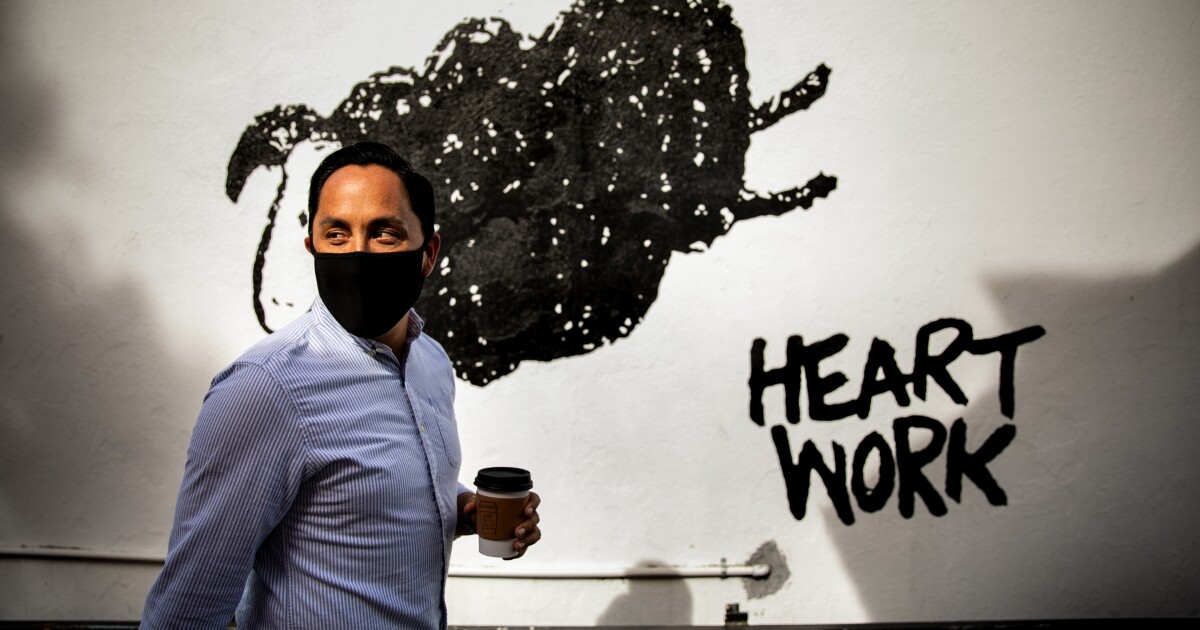 Gloria, who is Latino, Filipino and Native American, will be San Diego’s first mayor of color. He also will be the city’s first openly gay mayor.

Gloria also will be — arguably — the most powerful mayor San Diego has ever had.

Except for Bob Filner’s tumultuous eight-month tenure as mayor that ended in scandal seven years ago, Gloria will be the first Democrat to serve as San Diego mayor since the city switched to the “strong mayor” form of government in 2005.

Todd Gloria walks down the hallway alongside his aide Nick Serrano as he prepares to speak to the press the day after Election Day.

Because Democrats have controlled the City Council during that entire 15-year period, Gloria will be the first “strong mayor” except Filner to have a City Council controlled by his own party.

And Democrats don’t enjoy just a small majority on the council. They increased the number of seats they control on the nine-member panel from six to eight in elections this week.

Further increasing his power, Gloria will be the first mayor in modern history to simultaneously have strong backing from the business community and organized labor, two groups who are often at odds.

Gloria also is expected to have more clout in Sacramento than previous mayors. A state Assemblyman since 2016, Gloria is the first San Diego mayor with statehouse experience since Assemblyman Pete Wilson was elected mayor in 1971.

But Gloria also will inherit more challenges than most mayors. The COVID-19 pandemic has cratered tax revenue for the tourism-reliant city, creating a budget crisis that could rival or surpass the period after the Great Recession of 2008.

Todd Gloria drives through Mission Hills on Thursday with an extra mask by his side.

San Diego also faces one of the largest homelessness problems in the nation, a housing affordability crisis, crumbling infrastructure, calls for police reform and stark inequities between rich and poor neighborhoods.

“We are confronted by multiple crises that demand urgent attention from this city,” Gloria said last week.

Todd Gloria poses for a portrait outside his apartment on Thursday.

While he expressed confidence that he’s up to the challenge, Gloria said it’s unfortunate the budget crisis will make it harder. And it may even require cutting some programs at arguably the worst possible time.

“There weren’t too many people on the campaign trail who asked for fewer library hours or less road repair,” Gloria joked to reporters last week.

Gloria said he may be uniquely qualified to lead San Diego through a tough budget time.

He was first elected to San Diego’s City Council in 2008, right as the deepest recession since the Great Depression was taking shape. He also served as chair of the council’s Budget Committee from 2010 to 2016, making him intimately familiar with the process.

“It’s a matter of priorities, and I’m a pretty frugal guy,” Gloria said. “I believe we can figure out ways to protect neighborhood services while getting the city’s finances back on track.”

State Assemblyman and mayoral candidate Todd Gloria, alongside his partner Adam Smith and his parents Phil Gloria and Linda Gloria, casts his ballot at the San Diego County Registrar of Voters on Election Day.

The future mayor said he also has experience dealing with a crisis, which could help during the pandemic. Gloria was City Council president during the Filner scandal, and he served as interim mayor for eight months between Filner’s August 2013 resignation and Mayor Kevin Faulconer’s swearing-in in March 2014.

While Gloria said all the city’s problems are important, homelessness will be his first priority.

He is a longtime advocate for the “housing first” approach, where the goal is getting homeless people immediately into more permanent housing than a shelter and then providing them counseling and other support.

Other priorities will be the housing crisis, which he has tried to address in Sacramento with several pieces of legislation, and the city’s climate action plan, which he helped write six years ago.

Gloria praised Faulconer for making progress on the plan, but he said the city has not moved quickly enough to reduce people’s reliance on cars in favor of more environmentally friendly methods of getting around.

folks to forms of transit that are less consuming of carbon,” he said.

This is one area where his clout in Sacramento could help. Gloria also noted that Democrat Joe Biden’s apparent election as president this week could help California and San Diego get more funding to help achieve climate goals.

“We need partners in Sacramento and Washington to help us,” he said. “I’m happy to use those relationships and connections.”

While Gloria has a different perspective and priorities than Mayor Faulconer, he said he doesn’t expect dramatic changes in city staff, at least not immediately.

odd Gloria, who is on track to be mayor-elect of San Diego, drives past a “Black Lives Still Matter” sign in Hillcrest just days after the election.

He said his decisions won’t be based on whether Faulconer’s appointees are Republicans or Democrats.

“The question is more about whether they can support the vision that I laid out as a candidate that has now been endorsed by the people through their votes,” he said. “If folks are willing to help me to implement that, I suspect we’ll be able to keep a great number of people there.”

Faulconer was criticized by some community leaders for promoting David Nisleit to police chief in 2018, instead of hiring someone from outside the city and possibly someone of color.

Gloria said last week that he’s upbeat about working with Nisleit, whom he’s known since Gloria was a fledgling councilman and Nisleit was a patrol commander in City Heights, which was part of Gloria’s council district.

“I like him a great deal, and I believe he will help me make San Diego a national model for law enforcement reform,” Gloria said.

Gloria often introduces himself with pride as the son of a maid and a gardener. He is a lifelong San Diegan who graduated from Madison High School and the University of San Diego.

He said he’s aware that his election as mayor could create concern for some longtime San Diego residents more accustomed to the string of White Republican men who’ve led the city for many years. But he said those concerns would be unfounded.

“My goal is to make the changes that are needed to protect the quality of life that they and their fellow San Diegans cherish,” he said.

Gloria said he wants to make changes that will reduce traffic congestion and provide enough affordable housing, so fewer longtime San Diegans have to watch their children and grandchildren leave the area because of high housing costs.

While Gloria, 42, may be on the verge of becoming the most powerful mayor in San Diego’s history, he still plans to lead his life like an ordinary guy.

Todd Gloria takes out the trash two days after the election as his partner Adam Smith takes their dog Diego for a walk.

On Thursday afternoon, he was winding down his mayoral campaign by running some errands and preparing for a few days of relaxation, a brief respite before the real work of governing begins.

He stepped out of his small Mission Hills apartment — “The Mayoral Mansion,” his aide, Nick Serrano, joked — to take out trash as his partner, Adam Smith, took their dog, Diego, for a walk around the neighborhood.

His problems were a little simpler that afternoon than the huge challenges facing the city. He had to do laundry, pick up dry cleaning and drop a letter in the mail. But before any of that, he needed some coffee.

Standing in line at Heartwork Coffee, he got some inquisitive looks from people who recognized him but weren’t sure who he was, and then some congratulations from people familiar with him and his always reliable good cheer.

Back at his home later on Thursday, he was on a call discussing his plans as mayor.

“I think we can do a lot of great things together,” he told the person on the other end of the line.

Todd Gloria takes a phone call outside his home on Thursday.

The True Story of ‘The Butler’ – Cecil Gaines vs. Eugene Allen