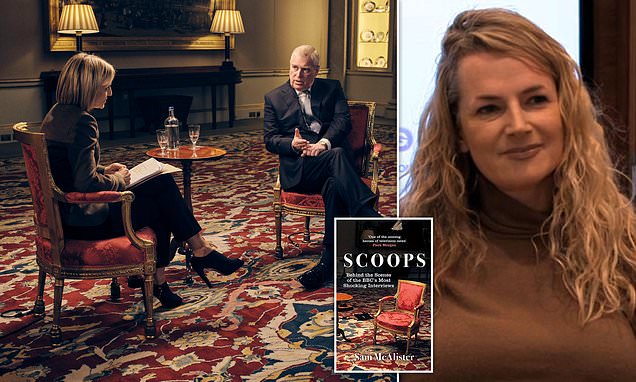 By Stewart Carr For Mailonline

The former Newsnight producer who secured the infamous ‘scoop’ interview with Prince Andrew is now allegedly facing a backlash from BBC colleagues – who are said to be frustrated that she is taking all the glory.

Sam McAlister helped to arrange the November 2019 interview of the Duke of York by Emily Maitlis, who quizzed him over his friendship with paedophile Jeffrey Epstein.

The interview was widely judged to be a disaster for the duke, in which he fumbled to explain his connections with Epstein and since-jailed Ghislaine Maxwell – while failing to express any empathy with the pair’s victims.

Now, McAlister has recounted the events leading to the notorious interview in her book Scoop, the rights of which have already been purchased by a film company.

of the Duke of York

But BBC sources are said to be ‘seething’ as they perceive McAlister taking the lion’s share of credit for a team effort, as well as benefiting financially by revealing tricks of the trade, The Telegraph reports.

Key figures in the story, including Newsnight interview Emily Maitlis, are said to be reduced to peripheral figures in McAlister’s narrative.

A BBC insider said: ‘There is internal disappointment because it is not the done thing to expose how you go about these journalistic practices and also because a lot of people who did a considerable amount of work on this show are being written out of the process in pursuit of one person’s career.

McAlister’s book Scoop has allegedly drawn the ire of former BBC colleagues, who are said to be ‘seething’ that she is taking the glory for securing the notorious interview

The BBC, representatives of Ms McAlister and OneWorld, the publisher of Scoops, have been contacted by MailOnline.

A BBC spokesman previously declined to comment, stating: ‘Once staff have left the BBC, they have left.’

Buckingham Palace also previously declined to comment on the matter.