Founder
member of the Football League 1888 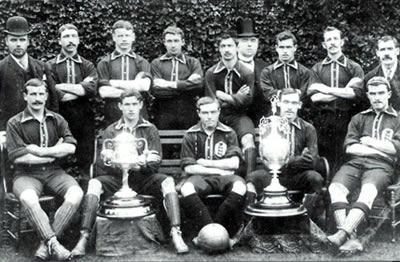 In most cities with two major
football clubs, loyalties tend to run in the family. Not so in Liverpool
where it is common for some members of the same family to support the
reds while others get behind the blues. The two clubs are in fact intimately
connected. Everton was formed in 1878 by a group of lads attending St
Domingo’s Church School who played at Stanley Park.

Research by David France indicates that the club’s original colours were blue and white vertically striped, serge shirts, the earliest confirmed reference to vertical stripes that has so far come to light. (The term “stripes” generally referred to horizontal hoops in the 1870s.)

Having rapidly established
a name for themselves in the city, St Domingo’s FC became Everton in November
1879. At the time it was customary for players who joined to play in the
shirts of their previous clubs (players had to provide their own kit in
those amateur days). Rather than have such motley arrangements, the secretary
had all shirts dyed black and a two inch scarlet sash was sewn in. Further detail, discovered by Jonathon Russell appeared in a report in the Liverpool Courier of October 1st 1881 on the opening game of the season against Liverpool Association: The new Everton costume consists of Black jersey and Pants and a white hose, with a crimson sash slung crosswise from shoulder to hip, a make up that gives the players a neat and business like appearance. This outfit
led to the team being nicknamed “the Black Watch” after the
famous army regiment.

It was not until 1901 that the now famous royal
blue jerseys were adopted. The early kits shown here have been verified
from club ledgers in the collection of David France and submitted by Steve
Flanagan.

In 1880 Everton were attracting crowds of over
2,000 and in 1884 moved into an enclosed ground at Priory Road. The landowner
soon objected to the numbers of rowdy supporters on his land and the club
moved again to a new ground off Anfield Road. In 1887 Everton entered
the English FA Cup for the first time and became embroiled in
controversy over paying their players after a series of acrimonious games
against Bolton Wanderers. Not only were Everton suspended for a month,
the Liverpool Cup that they had recently won was confiscated.

In 1888, Everton were invited to join the new Football
League and in 1891 they won their first League Championship. This success
prompted their landlord to double the annual rent on the club’s Anfield
home. Rather than meet this demand, the club leased a piece of waste land
north of Stanley Park known as Mere Green Field. Within months the first
purpose-built football stadium in England was built on the site which
was opened by Lord Kinnaird and named Goodison Park. In the meantime,
a new club, Liverpool FC, was formed to play in the now vacant Anfield. Ironically, Liverpool turned out for several seasons in a set of Cambridge blue/white shirts that Everton had left behind.

following year they
were beaten finalists once more. In 1914-15, the last season before the
League was suspended for the duration of the First World War, Everton
won the League title for the second time.

The first evidence of a crest on Everton’s shirts comes from 1912-13 – a monogramme on a white shield. This became a regular feature in the Twenties, albeit reversed.

In 1925 Everton signed the young Dixie Dean from
Tranmere Rovers. Dean had scored 27 goals in as many games for Rovers
and in his first season for Everton, he netted 32 times in 38 games. In
1927-28, Dean created history when he scored 60 goals in 39 matches, a
record that is unlikely to be beaten. The astonishing thing is that George
Camsell had set the record the previous season with 59 goals and with
three games of the season left, Dean was still eight goals behind Camsell!
The Dean era is regarded as the club’s golden age, although they suffered
the humiliation of a season in Division Two in 1930-31. The “Toffees”
(named for a striped mint flavoured boiled sweet produced in the area)
won the League title in 1928 and 1932, the FA Cup in 1933 and a fifth
League championship in 1939. Dean retired in 1937 but his mantle was taken
over by Tommy Lawton. Once again war interrupted the club’s career and
when football resumed Lawton was playing for Chelsea.

Everton were one of the first clubs to introduce a stripe to their shorts in 1930, something that became a signature of their otherwise conservative outfits until it was dropped in 1966.

A new official Everton crest was designed by the club secretary, Theo Kelly in 1938. His design included “the lock up” (a local landmark erected in 1787 as a village gaol) with the club motto, Nil Satis, Nisi Optimum (Nothing but the best is good enough) on a scroll underneath. This appeared on club ties first worn by Kelly and Everton’s chairman, Mr. E. Green on the first day of the 1938/39 season but did not appear on the team’s shirts for another 40 years.

The immediate post-war period proved a trial and
in 1951 Everton were relegated to Division Two. Although they returned
to the top flight in 1954, the rest of the decade was a barren period.
The arrival of Harry Catterick as manager in 1961 signaled a revival
in the club’s fortunes. After finishing in fourth position in

1962, the
club were champions in 1963 and in 1966 they won the FA Cup. In 1968 the
“Toffees” were beaten in the FA Cup Final but in 1970 Catterick’s
last great side, featuring Joe Royle, Howard Kendall and Alan Ball, won
the League championship once

In contrast, the club enjoyed no success in the
1970s at all while their arch-rivals Liverpool enjoyed unparalleled success
in domestic and European competition.

In 1972, in a concession to fashion, the club’s initials were embroidered onto the team

shirts in a typical script of the period. These were replaced in 1976 by plain, horizontal capitals.

design has been retained ever since although the detail has been modified over time. For example, Umbro introduced a new version for 1982-83, the last season of their contract with the club.

collar. The French company also redesigned the club crest. The iconic status of this outfit was settled when former player
Howard Kendall, appointed as manager in 1981, led the team to win the FA Cup in 1984.

Having been eclipsed
by Liverpool for such a long time, supporters now had high expectations
but it

was not until 1995 that Everton won another trophy, the FA Cup
with Joe Royle now managing the team.

For the first season in the new millennium a new version of the club crest was introduced.

While the club failed to win any major trophy
since then, they remained a consistent mid-table side in the top
flight, coming closest in 2009

when they were FA Cup finalists.

In May 2013 a new, simplified version of the club crest was launched intended to be easier to reproduce but this was poorly received by supporters. After 22,000 signatures were collected on a protest petition,

the club issued an apology and promised to consult on a replacement to be introduced in 2014-15. Around 20,00 supporters took part in the process with the overwhelming majority voting for “version A”, which restored all the iconography of Theo Kelly’s 1938 design but with a suitably modern look.

A further twist was added to the crest story when it was revealed that it would be worn on an Umbro strip, representing the return of this iconic English brand to top level football after Nike had sold it off in a disgraceful example of asset-stripping. The new strip took its inspiration from Everton’s 1924 kit.