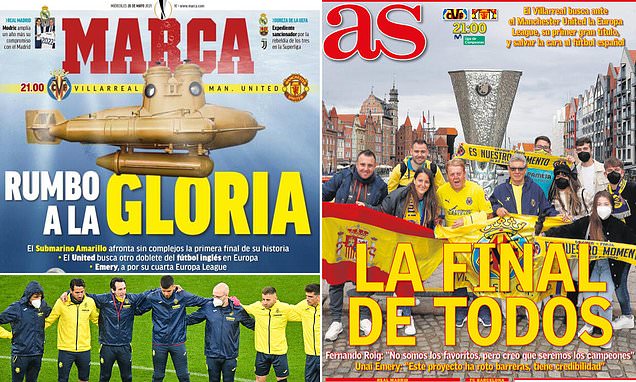 ‘The Yellow Submarine going for glory!’: Spain’s media rally behind Villarreal to ‘save the face of Spanish football’ as they prepare to meet Manchester United in the Europa League final tonight

By Jack Bezants for MailOnline

Spain‘s media have rallied behind Villarreal as they prepare to lock horns with Manchester United tonight in their first ever major European final.

Unai Emery’s men meet the Red Devils in Gdansk, Poland knowing victory would not only deliver their first piece of continental silverware but also clinch a place in the Champions League next season.

And Spanish media on Wednesday have thrown their support behind the LaLiga side in an unusual show of united support, considering Spain’s sporting press is usually divided between Real Madrid and Barcelona.

‘United seeks another double for English football in Europe. Emery is going for his fourth Europa League.’

The sentiment is echoed by AS, who have a picture of Villarreal supporters out in Gdansk be

fore the final on their front page.

That publication says that a victory for Villarreal would ‘save Spanish football’s face in a tough year’, reflecting upon the struggles of their two major powers in Real Madrid and Barcelona.

Madrid were beaten in the semi-final of the Champions League by Chelsea, who will face Manchester City in Saturday’s final, while Barcelona crashed out in the last-16 against Paris Saint-Germain.

LaLiga champions Atletico Madrid, meanwhile, were also knocked out by Chelsea, alongside Barca in the round of 16.

Villarreal finished seventh in the LaLiga table for 2020-21 and as Marca referred to on their front page, Emery has significant pedigree in the Europa League having won the tournament three times during his time as Sevilla boss.

Emery has won the Europa League three times before, all of those victories with Sevilla

Elsewhere in Spain’s media, there are shows of support in other publications such as Sport but their main focus is on the uncertainty over Ronald Koeman’s place as Barcelona manager, as well as the club’s pursuit of Liverpool midfielder Georginio Wijnaldum.

Koeman is under intensifying scrutiny after Barcelona finished third in LaLiga. Whether Koeman stays or goes, Barca are expected to sign Wijnaldum from Liverpool on a three-year deal once his deal expires at Anfield in June.