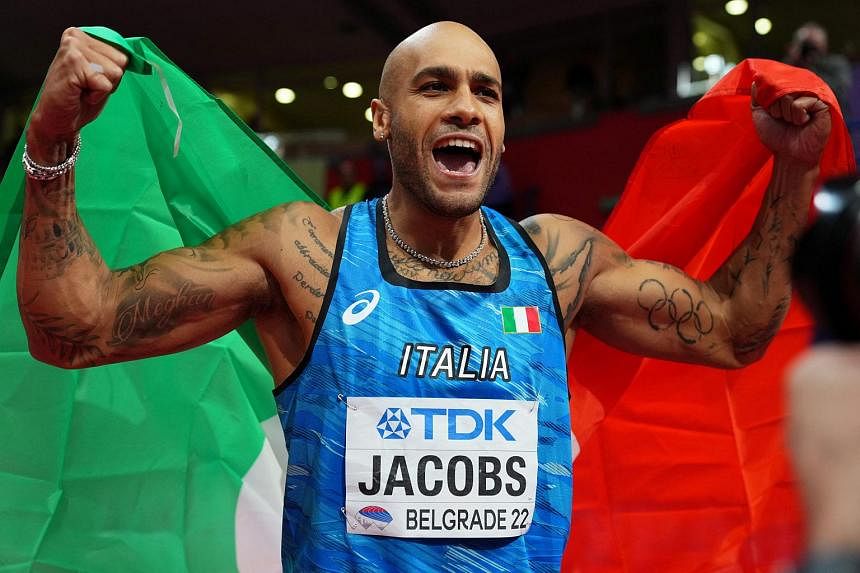 (REUTERS) – Despite coming into this week’s World Championships in Eugene, Oregon, a double Olympic champion, Italian sprint sensation Lamont Marcell Jacobs is still something of an enigma after a tumultuous year following his Tokyo triumph.

The Texas-born 27-year-old shocked the world when becoming the first Italian to win Olympic 100 metres gold last August, setting a European record time of 9.80 seconds in Japan, before adding a second gold in the 4×100 metres relay.

It completed a rapid rise for the former long jumper, given he broke the 10-second barrier for the first time only three months before the Tokyo Games.

Such a stunning victory led to some media reports highlighting past doping cases involving breakout athletics stars, but Jacobs said his success was purely down to his efforts.

As the rumours over the merits of his success circulated, however, Jacobs did his best to remain out of the public eye, which only intensified speculation in some British media outlets.

“It makes me smile, thinking of those people who spoke without thinking about what they were saying, who must now look to their own (British) home instead,” Jacobs told Rai after Britain’s 4x100m relay silver medallist CJ Ujah was provisionally suspended in August for allegedly breaching anti-doping rules.

“I have worked so hard, I have made sacrifices and I did not want to lend weight to people who do not know

what they are talking about.”

His appearances on the track also remained sparse. Jacobs did not race again in 2021, citing “exhaustion”, waiting until February to make his return, winning a 60m race at a Berlin indoor event.

Media appearances remained rare, with fans forced to rely on posts on Instagram to get updates on Jacobs’ whereabouts.

When he did turn out on the track, the wins kept on coming.

Jacobs overtook Christian Coleman to win gold in the 60m at the World Indoor Championships in March, winning with a European record time of 6.41 seconds.

Jacobs then picked up an injury at a meet in Italy later in May, with few details released as to the extent of the setback, keeping that element of mystery prevalent. He then withdrew from Diamond League meetings in Eugene, Rome and Oslo.

An unconvincing performance saw Jacobs claim a fifth Italian 100m national title last month, but a recurrence of a muscle injury, which his team labelled “glute tension”, ruled him out of the final Diamond League meeting in Stockholm before the World Championships start on Friday (July 15).

Jacobs again took to Instagram to explain another withdrawal, stating he was heading to Eugene early to “test the waters”. Not even the man himself is sure what level the Olympic champion will be at as he guns for a first World Championship gold.

Senators 6, Canucks 2: Gaudette the story on a night of little glory